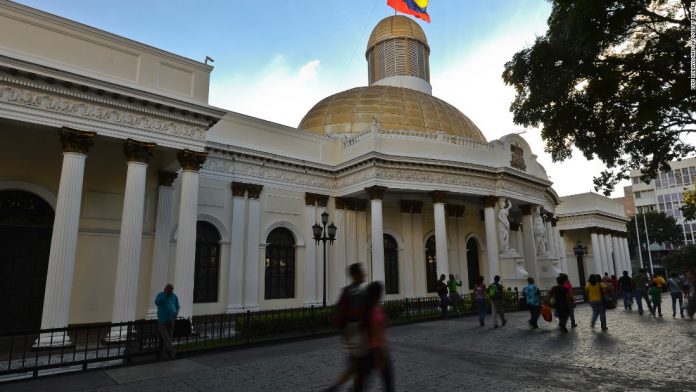 Other Facts:
Venezuela is located on the northern coast of South America, sharing a border with Colombia, Brazil and Guyana.

The country’s formal name is the Bolivarian Republic of Venezuela.

Venezuela has proven oil reserves of approximately 300.88 billion barrels.
Despite being one of the world’s top oil-producing countries, more than 30% of Venezuelans live below the poverty line as of 2015.

1821 – The Spanish Army is defeated. Venezuela gains independence as part of the Republic of Gran Colombia.

1830 – Venezuela breaks away from the federation to become an independent republic.

February 1992 – A coup led by Hugo Chavez is put down. Chavez spends two years in prison before being pardoned.

November 1992 – Another coup attempt is defeated.

December 1998 – Chavez is elected president by a landslide.

April 26, 1999 – Chavez signs a new law that allows him to bypass the Venezuelan Congress on economic reforms.

December 16, 1999 – Chavez’s new constitution, which extends his term, allows him to run again, closes the Congress, and changes the name of the country to the Bolivarian Republic of Venezuela, is endorsed by the Venezuelan people in a referendum.

April 12, 2002 – A coup ousts Chavez for two days, but he is returned to power by loyal troops and supporters. Sixty people are killed during the turmoil.

October 22, 2002 – High-ranking military officers go on national television to denounce Chavez and call for the public to rally against him.

December 2, 2002 – A general strike begins. The strike lasts 64 days, costs Venezuela $4 billion in oil revenues, and affects oil prices worldwide. During the strike, crude output of oil is estimated at about 400,000 barrels a day, compared to the pre-strike level of 3 million barrels a day.

March 7, 2004 – Thousands of Venezuelans march against Chavez, protesting an electoral council’s decision that the opposition had not collected enough valid signatures to trigger a recall referendum.

June 3, 2004 – Venezuela’s National Electoral Council announces that the opposition has collected enough valid signatures to call for a referendum against Chavez.

August 15, 2004 – Initial results in the recall referendum show more than 58% of Venezuelans have voted to keep Chavez in office while 42% favor ousting him.

August 16, 2004 – A group of observers led by former US President Jimmy Carter announce that they found no fraud in the recall election.

February 15, 2009 – A constitutional referendum passes that will allow Chavez to run for a third six-year term in 2012.

May 24, 2011 – The United States imposes sanctions against seven companies, including Venezuela’s state oil company, for supporting Iran in the energy sector.
May 2, 2012 – Chavez names 10 Venezuelans to a commission called the Council of State.

March 5, 2013 – Chavez dies of cancer at the age of 58. Vice President Nicolas Maduro becomes the interim president.
April 14, 2013 – Maduro narrowly wins the presidential election with 50.8% of the vote, defeating opposition candidate Henrique Capriles Radonski.
September 30, 2013 – Maduro announces on state-run TV that he is expelling three US diplomats. He claims they were involved in acts to destabilize the country.
February 2014 – Protests are held in response to economic problems and a spike in crime. Some demonstrations turn violent, with at least three protestors dying amid the unrest and police firing tear gas at the crowd.
February 18, 2014 – Opposition leader Leopoldo Lopez is arrested on charges including conspiracy and murder in connection with the demonstrations. He is later convicted and sentenced to 14 years in prison.
December 18, 2014 – The US Congress passes the Venezuela Defense of Human Rights and Civil Society Act, a measure that directs the United States to impose sanctions against Venezuelan officials who engage in human rights abuses.
February 20, 2015 – The mayor of Caracas is arrested and accused of being involved in a plot to overthrow the government. The opposition says the mayor’s arrest is an attempt to divert attention from the country’s economic woes.
March 9, 2015 – President Barack Obama issues an executive order meant to address the human rights crisis in Venezuela, with sanctions against seven individuals. One of them allegedly prosecuted opposition members with fraudulent evidence while the others are accused of engaging in violence against peaceful protestors.
December 6, 2015 – Venezuela’s opposition party claims the majority of seats in elections to the National Assembly, a repudiation of Maduro. It is the first major shift in power in the legislative branch since Chavez took office in 1999.
January 15, 2016 – Maduro declares a state of “economic emergency.” The country’s economic woes are rooted in falling oil prices, plummeting currency rates, power struggles within the government, the looming possibility of default and ongoing food shortages.
March 4, 2016 – Obama extends the executive order because, according to the order, the situation in Venezuela has not improved.
March 9, 2016 – Maduro announces he’s recalling Maximilien Arvelaiz, Venezuela’s top diplomat in Washington.

October 2016 – After a recall referendum to oust Marduro is halted, opposition lawmakers meet for a special session to discuss the possibility of impeaching Maduro. Pro-government protestors break into the assembly hall to disrupt the meeting.