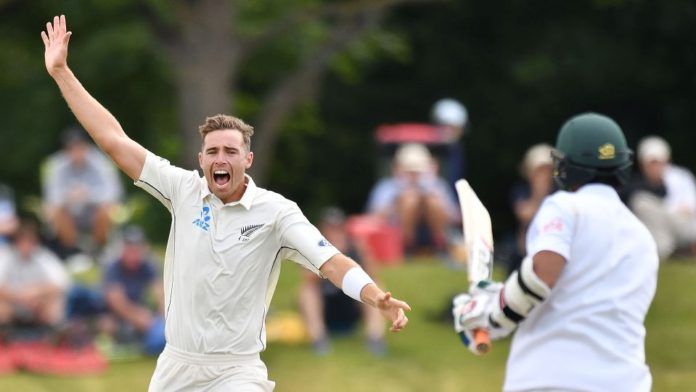 
Highlights – Nine out of ten for Southee and Boult

The pace and texture of the day was transformed. The last five Bangladesh wickets stretched the innings out by a further 46 overs, during which time they scored 110 runs, with the lower order – particularly the debutants Nurul Hasan and Nazmul Hossain Shanto, who added 53 for the sixth wicket – batting resolutely and New Zealand helping them with some puzzling tactics. Kane Williamson, their captain, did not use their specialist spinner Mitchell Santner all day, and got his quicks to pepper the lower order with incessant short balls, not changing tack even after taking the second new ball.

The short ball dismissed Nazmul, Taskin Ahmed and Nurul, but by no means swiftly, and dealt the No. 11 Rubel Hossain a jarring blow to the elbow, but it was hard not to wonder if the fast bowlers wouldn’t have been better served bowling a good length and looking for some swing. It was via this method that Southee ended Bangladesh’s innings with his fifth wicket, pinging Kamrul Islam Rabbi’s back pad in front of middle and off stump with late away-swing from a good length. Kamrul faced 63 balls to score 2, and added 32 for the last two wickets – in 18 overs – with Nurul and Rubel.

New Zealand could have wrapped up the innings far more swiftly had they held on to their catches. Nurul alone enjoyed three lives. On 4, he reached out to a wide one from Boult and nicked towards third slip, where the ball bounced off Southee’s hard hands. Then, on 21, he sparred at Colin de Grandhomme with an open bat-face, and bisected first and second slip, leaving Ross Taylor and Jeet Raval looking questioningly at each other. Finally, on 36, he jabbed at a short one from Neil Wagner angled across his body, and Taylor got his hands in a tangle while going for a straightforward chance coming at his chest.

In all, it wasn’t the greatest day for New Zealand’s catchers; Raval, diving across from second slip, had dropped Sarkar off de Grandhomme on 52, denying Taylor what would have been a simple shoulder-high chance.

Still, New Zealand will have been pleased to restrict Bangladesh to under 300 after the start they had made. The turnaround began in the ninth over after lunch, when Boult got a fullish ball to stop on Sarkar and leave him off the pitch as he strode forward to drive; checking his shot; he only managed to spoon a catch into the covers. Then came a perfectly delivered short ball angled across Sabbir Rahman to square him up and produce a nick to the slips. Four balls later, Shakib overbalanced a touch while trying to glance Southee and tickled a catch down the leg side.

Sarkar, making a comeback thanks to a spate of injuries to Bangladesh’s players, made his maiden Test fifty and eventually fell 14 short of a hundred. It was an odd innings, defined by his willingness to go after anything remotely close to his driving arc, often stroking the ball on the up, and while it looked pretty when it came off, it often didn’t, as his control percentage – 74 – suggested. His innings contained its share of plays-and-misses, airy drives that sneaked into gaps, and edges that streaked to the third-man boundary.

At the other end, Shakib was equally keen to drive on the up, but looked more secure while doing so, his footwork and weight transfer indicating the form he was in, coming off a double-hundred in the first Test. Both batsmen also pulled with authority, the fast bowlers’ attempts at banging it in short causing little discomfort on a pitch with true bounce but not a lot of pace.

Sent in to bat under largely blue skies, Bangladesh’s patched-up top order had to contend with a new-ball pair generating swing consistently. Southee struck in the fourth over, cramping Tamim Iqbal, Bangladesh’s stand-in captain, with a short, rising ball that came back in towards the left-hand batsman’s right armpit. Looking to tuck it away into the leg side, Tamim only managed to glove it to the keeper.

Mahmudullah and Sarkar then added 31 brisk but uneasy runs as Southee and Boult continued to swing the new ball and beat their edges. Twice in a row, Boult bent the ball back through the gap between bat and pad after angling it across Mahmudullah, and missed the off stump by inches. Two balls later, he had a confident caught-behind appeal turned down when a short ball climbed awkwardly at the batsman. New Zealand reviewed Paul Reiffel’s not-out decision, and technology confirmed the ball had gone past bat and brushed only right shoulder.

Boult didn’t have to wait much longer, though. In only his next over – the 11th of Bangladesh’s innings – Mahmudullah drove away from his body and outside the line of another inwardly curling delivery, and BJ Watling dived to his left behind the wickets to pluck an excellent catch off the inside edge.

Karthik Krishnaswamy is a senior sub-editor at ESPNcricinfo