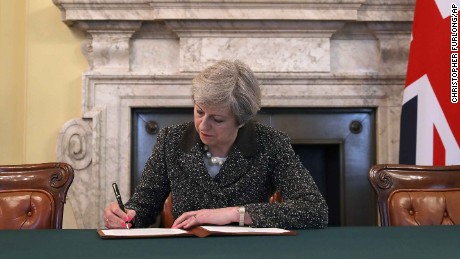 Politicians regularly choreograph significant moments to ensure maximum publicity. But Sturgeon’s relaxed pose, curled up with her shoes off on a blue couch at her official residence of Bute House, has people talking.

The photo has drawn comparisons to one of Margaret Thatcher signing documents at Downing Street and putting her feet up at the end of a long day back in 1983.

Some on social media pointed out the contrast between Sturgeon’s photo and a more formal shot of British Prime Minister Theresa May signing the letter that triggered Article 50 earlier this week, kick-starting the UK’s withdrawal from the European Union.

Others joked that Sturgeon was actually just finishing a newspaper crossword, or writing a letter to Santa.

Sturgeon’s tweet appears to be the latest volley in her ongoing battle with May. The Scottish Parliament gave the green light for a second independence referendum on Tuesday, and the letter is expected to be delivered to the Prime Minister on Friday.

Sturgeon is calling for a referendum to take place sometime between autumn 2018 and spring 2019, but May has indicated she will reject that timetable.

Earlier this month, Sturgeon, the Scottish National Party leader, railed against May’s approach to Brexit, arguing that the UK was headed towards a “bad deal.” May hit back at Sturgeon for her “tunnel vision.”
Voters in Scotland chose to remain part of the UK in a 2014 independence referendum. In last year’s Brexit poll, Scotland overwhelmingly voted to remain in the EU.

It isn’t the first time this week that a photograph of Sturgeon and May has hit the headlines.

The Daily Mail was slammed for sexism when it published a front page photograph of Sturgeon and May alongside a headline shouting: “Never mind Brexit, who won Legs-it!”