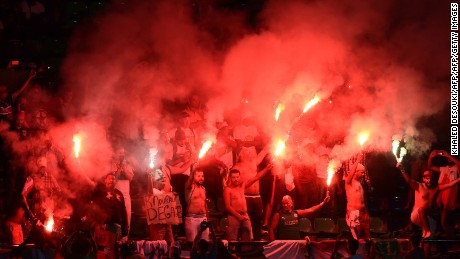 Despite a spirited performance against group-winner Senegal in Franceville, Riyad Mahrez and his Algeria teammates leave Gabon without a win to their name.

It wasn’t supposed to end like this. Having made the last 16 of the 2014 World Cup, this golden generation had arrived in Gabon hoping to lift the AFCON trophy for the first time since 1990.

Instead it’s Senegal’s Lions of Teranga that progress from Group B unbeaten, after goals from Papa Kouly Diop and Moussa Sow canceled out a brace from Mahrez’s Leicester City teammate Islam Slimani.

As it happened, even victory wouldn’t have seen the Desert Warriors through to the quarterfinals.

Coach Georges Leekens had glumly admitted his players no longer had their destiny in their own hands after failing to beat unfancied Zimbabwe and Tunisia — and so it proved, as events elsewhere consigned Algeria to an early exit.

The air of futility that could have lent to the occasion didn’t impact upon the action itself.

Despite Senegal coach Alou Cisse making 10 changes with qualification guaranteed, both sides started with urgency, and barely ten minutes had passed before the game had its first goal.

Acquired from Sporting CP for over $30 million, Slimani is another big name this tournament will miss, and the Leicester City frontman was a constant menace, meeting a measured cross from Sofiane Hanni on the volley after deft play down the left.

Senegal responded — showcasing a strength in depth that could see Cisse’s men go far — as Diop’s volley bounced into the ground and past the despairing Malik Asselah just before half time.

At that stage, the Algerian contingent could not have been unaware of proceedings in Libreville, but both sets of players reentered the field for the second period with renewed vigor.

Mahrez — directly involved in five of the past eight AFCON goals scored by Algeria — looked determined to say goodbye on a high, teeing up Slimani for his second of the night.

There were initially doubts the ball had crossed the line but back came Senegal, and barely two minutes had passed before stand-in striker Moussa Sow had leveled things, capitalizing on a loose ball on the edge of the penalty area to fire home a low drive.

Slipped through by Hanni once again, Slimani could have won it for Algeria with just over ten minutes to play — sealing his hattrick in the process — but dragged his shot just inches wide with only the keeper to beat.

Victory in truth would only have papered over the cracks of a underwhelming tournament, and the Fennec Foxes go home with their tails between their legs.

Having rested the key players including Cheikhou Kouyate, Henri Saivet and Sadio Mane, Senegal’s Lions of Terranga march on to a quarterfinal tie against Cameroon in Franceville.

It could have been a nerve-wracking evening for Tunisia in the Gabonese capital of Libreville, but the Eagles of Carthage put in one of the performances of AFCON 2017 to comfortably qualify for the quarterfinals.

Four first-half goals put a dominant Tunisia out of sight and established a lead which it never looked like relinquishing.

Tunisia knew a drew would be enough to see it qualify for the quarterfinals, while anything less than a win would see Zimbabwe exit the competition.

The Warriors of Zimbabwe needed to begin positively but got off to the worst possible start, finding themselves a goal behind inside 10 minutes.

Wahbi Khazri’s poor corner bobbled its way to the edge of the of the box and Naim Sliti was afforded the freedom of Libreville by Zimbabwe’s defense, before firing a shot which took two deflections to deceive goalkeeper Tatenda Mkuruva.

And it wouldn’t be long before Tunisia doubled its lead. This time Sliti turned provider, threading an intricate through ball into the path of Youssef Msakni after some wonderful interplay between the pair.

Msakni duly rounded off the move by slotting the ball low past Mkuruva.

With 10 minutes remaining of the first half, Tunisia ended the match as a contest and with it the hopes of both Zimbabwe and Algeria.

Once again, slack defending was Zimbabwe’s undoing as Taha Yassine Khenissi slid onto a low cross to turn the ball into the net.

While crowds have been sparse at the best of times in Gabon, the attendance in the Stade d’Angondjé was so low — fewer than 2,000 — that the game’s atmosphere was reminiscent of a training match, belying its importance as a deciding clash in a major international tournament.

Far from letting their heads drop, though, the Warriors rallied.

Knowledge Musona cleverly cut in from the right, before drawing a smart save from Rami Jeridi.

However, it wouldn’t be long before the Belgium-based striker gave his side a breakthrough — and with it a glimmer of hope.

Musona’s clever chip took the ball past two Tunisian defenders and created space for him to fire a shot past Jeridi into the far corner.

But any rekindled hope of a miraculous comeback was extinguished almost immediately.

Costa Nhamoinesu, who in truth was fortunate to still be on the pitch after a succession of cynical fouls, was penalized for clumsily tripping Khenissi in the penalty area, giving the referee no choice but to point to the spot.

Khazri stepped up and fired the ball low to the Mkuruva’s left, though the keeper will feel he could have done better after guessing the right way and getting a hand to the shot.

If Tunisia thought the second half would be won at a canter, Zimbabwe provided an early reminder that it wasn’t finished in Gabon just yet.

Tendai Ndoro galloped onto Musona’s through ball and calmly poked the ball through the legs of the onrushing Jeridi.

Though Zimbabwe did enjoy significant periods of dominance in the second half, a lack of quality and attacking cohesion meant Tunisia’s defense went largely untroubled.

Who will win the 2017 Africa Cup of Nations? Have your say by tweeting CNN Football

In the end, greater technical ability allowed Henryk Kasperczak’s side to wrest back control from Zimbabwe’s briefly tightening grip.

The final scoreline does afford the Warriors a modicum of respectability, although Tunisia could — and should — have put the game beyond doubt.

Safely through, the Carthage Eagles have five days to prepare for a quarterfinal clash against Burkina Faso.