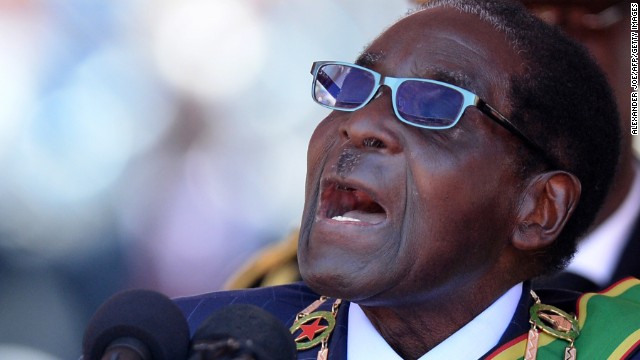 Its five longest presidencies stretch between 29 and 36 years, adding to a cumulative 169 years. Their longevity in office is matched by their old age, ranging from 71 to 91 years, and a combined 390 years.

Gabon’s Omar Bongo had been president for a whopping 41 years when he died in office at the age of 73 in 2011. Hastings Banda, Malawi’s self-proclaimed president for life, was in his late 90s when he was ousted from office in 1994. Zimbabwe’s Robert Mugabe is 91, making him the oldest leader in the world.

The average age of the ten oldest African leaders is 78.5, compared to 52 for the world’s ten most-developed economies. Arguably, compared to other continents, Africa has a very small proportion of younger leaders between 35 and 55. Paradoxically, the continent has the youngest population in the world, with a median age of 19.5 years according to the U.N.

Africa has a leadership age gap disconnect between the leaders and the led. To put it into context, 85% percent of Angolans were not born when Dos Santos came into power in 1979. 83% of Zimbabweans were born after Mugabe first came into power as prime minister in 1980, while 79% percent of Ugandans were born after Museveni took over power in 1986.

On average, only between 15% to 21% of their citizens were alive when these presidents took the reins.

So, with a burgeoning youthful demography at the bottom, the political top is disturbingly a graying lot. The issue here is the age at which African leaders continue to hold the fort and ultimately refuse to unclench their grip on power.

Read more: 326 billion reasons Africa is on the move

This question has been given specific relevance by the poster boy of the aging leadership, the nonagenarian Mugabe. He recently read an old state of the nation address to his parliament.

This, after he had an earlier mistakenly denounced his own party, shouting “down with ZANU PF”. The increasing gaffes and their frequency tell a progressively sad narrative: the old man is unable to exercise or retain the alertness needed for the job.

It shows him to be obviously incapable of providing an unclouded vision that matches the pace, expectations and tongue of time. But most troubling, leaders such as him have failed to deliver on the expectations of their burgeoning youth.

Part of the explanation across the board is their mastered use of brute force and violence to cow opponents. Also, the aging leaders’ supporters argue that with age and longevity in office comes wisdom, foresight and experience. But this is clearly contradicted by the abysmal performance of their economies and uncertain sociopolitical stability.

Yet, such leaders still attract reverence and unbridled loyalty from their supporters. Equally, being seen as “fathers of the nation”, who led independence or liberation struggles, makes them irreproachable, irrespective of their shortcomings, extending their tenure.

Perhaps a broader explanation that cuts across their respective constituencies lies in the combination of political machinations, shrewd political brinkmanship through patrimonial networks and corrupt practices.

Undoubtedly, it is also their longevity in the executive office that has curtailed and stifled the emergence of credible and youthful successors. But this doesn’t fully explain why Tunisia, Namibia, Liberia, Ghana and others still return leaders in their twilight years. This begs the question: are African youths still unable to appreciate their ability to dictate the pace and direction of their own destinies or the correlation between their leaders’ age and their floundering fortunes?

Read more: What is Africa’s most competitive country?

Clearly the answer is in the affirmative. This paradox is informed by a binary where those at the top are stuck in the anti-colonial/Western mentality. Added to this are nostalgia of liberation struggles and distrust for youth, while those at the bottom are driven by technological innovation, globalization, the pressure of consumerism and the frustration of unfulfilled promise.

Much of the progressive world embraces the innovativeness of youth — its energy, vibrancy, adaptability, willingness to embrace change and enthusiasm to learn. Africa, on the other hand, wobbles behind, unable to keep pace, thanks to its conservative aging leaders.

For as long as the leaders and their followers have differing interpretations of what the continent needs today and tomorrow, Africa will for the foreseeable future stay caught in unpredictable generational crosswinds between her past and the future.