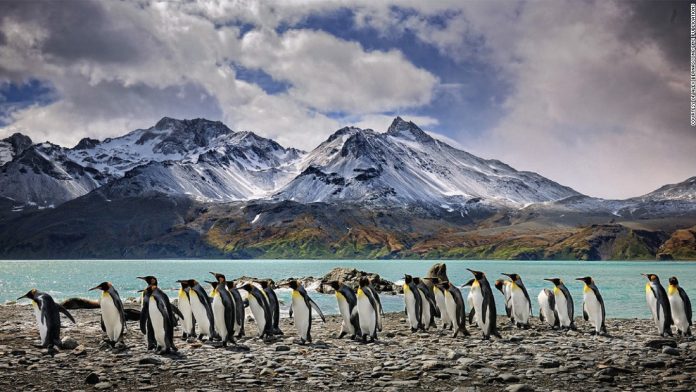 (CNN) — Antarctica covers an area of almost 14 million square kilometers — about the same size of Europe.

Here in the most inhospitable place on Earth, temperatures can reach -90 C and winds on the eastern shores blow at an average of 80 kilometers per hour.

The human population of Antarctica, mainly there to conduct research, varies from about 1,000 in winter to 4,500 in summer.

But the sea ice and waters are home to some of the planet’s most impressive bird life, as well as fish, squid, whales and seals.

His new book, “Blue Ice,” a followup to 2010’s “Wild Africa,” is the result of an expedition around Antarctica and South Georgia.

CNN: How long did the expedition take to plan?

Bernasconi: A trip like this needs to be organized at least two years in advance.

You need to plan out a schedule, but it all depends on the weather, which can change dramatically with almost no warning.

Sometimes it’s too dangerous, if not impossible, to land the boat due to strong winds or big waves, so the expedition leader needs to reposition or try somewhere else.

CNN: What equipment did you use?

Bernasconi: The extreme conditions means it’s best to carry more gear in case of malfunctioning or damage: salt spray, rain, wind and cold can affect even the most rugged equipment.

I brought almost all type of lenses, from 14mm to 500mm, and I had the chance to use them all, but wide angles and medium zoom were the most utilized.

I usually worked with two camera bodies to avoid changing lenses too frequently, and had two spares on board.

CNN: You’ve photographed some of the world’s most dangerous predators. How do you get intimate shots while staying safe?

Bernasconi: I always try to get as close as I can to any wildlife.

I like to use the shortest lens possible, or take extreme closeups with zoom lenses.

As [photojournalist] Robert Capa once said: “If your pictures aren’t good enough, you’re not close enough.”

I usually approach wildlife in such a way as to let them get used to my presence, lying still on the ground if possible.

CNN: Any encounters that got too close?

Bernasconi: Once a big elephant bull charged me while I was taking pictures from the ground.

If you choose the right individual you know that these are often just mock charges and you have time to get nice ground shots by staying perfectly still until it stops and retreats.

But that time this massive bull kept running toward me, much closer than I have ever experienced before, and he stopped only a few meters from me.

CNN: What are the differences between Antarctic species?

Bernasconi: In South Georgia and Antarctica you don’t have to deal with dangerous predators.

Penguins are particularly curious and generally friendly, so very easy to deal with.

Elephant seals are massive and can be ill-tempered so they require just a bit more caution, while fur seals are particularly aggressive.

It’s always best to keep your eyes open because they can charge and bite you with no warning.

In some cases, when I was surrounded, I had to use my tripod to defend myself.

The albatross has the largest wingspan in the bird kingdom: up to 3.4 meters.

CNN: How do you set up your landscape shots?

Bernasconi: The hardest job for a photographer is to summarize the soul of a place in a single frame.

It’s getting the right composition, at the right time, when all the elements blend together: animal behaviors, position, balance between foreground and background, light and shadows.

I’m so absorbed in what I’m doing, it’s like a kind of trance.

I gain a sort of extra strength and endurance, so that I could hike for hours, stay perfectly still lying in the guano, awaiting the right moment even if it’s windy or cold or wet.

These wild places inspire me so much that the pleasure of being a privileged witness to such beauty makes me able to handle almost any kind of discomfort.

CNN: And the gear?

Bernasconi: For landscapes I used, when wind and rain gave me the chance, Lee ND filters to achieve the best possible in-camera exposure, and a sturdy carbon tripod with pano equipment to realize panorama shots.

Carrying all this gear for long hiking hours can be tiring but it’s the only way to achieve all the kinds of images nature is giving you the opportunity to observe.

CNN: You’re following in the footsteps of the great pioneering early 20th-century photographers such as Herbert Ponting and Frank Hurley.

Bernasconi: Today everyone with a camera can choose to go to Antarctica and come back safely, thanks to modern ships, satellite communications, technological outfits, good food and the latest camera equipment.

The men 100 years ago were real explorers and pioneers.

At that time, embarking on such an expedition was a real challenge, and for sure you knew you were putting your life at risk.

The images captured by Ponting and Hurley are extraordinary for many reasons, technically and as a testimony of an heroic era.

My work has been so much easier: It’s just my visual tribute to the most extreme region of the world.

CNN: What was it like being in one of the wildest corners of Earth?

Mother Nature protects this corner of the world with such intensity and sometimes dreadful violence that I like to think it’s because these places are so important and fragile.

Even though I’ve already been in some of the most faraway and wild locations of the world, when I was in Antarctica, so distant from any human presence, I felt an even deeper contact with nature than I’ve ever felt before.

CNN: What do you think about NASA’s recent findings that ice gain in East Antarctica and the interior of West Antarctica could offset ice loss elsewhere?

Bernasconi: I leave these scientific discoveries and debates to the experts: every now and then we are fed contradicting information, so that for the rest of us it’s difficult to understand what’s really going on.

I’d be happy to know that our behavior is not really affecting this extremely important environment, but I still think we must try with all our force to make sure that our awesome natural world will be preserved for future generations.

I’m really fond of a Masai proverb that says: “Take care of our Earth. We do not inherit it from our ancestors, we borrow it from our children.”

“Blue Ice” by Alex Bernasconi is published by Papadakis (RRP £30/$50). It’s available in bookstores and online at thegmcgroup.com or amazon.com.