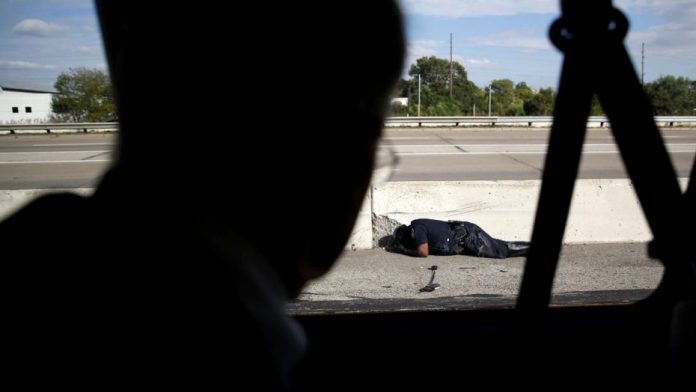 A police officer involved in an accident lies on the ground as President Trump’s motorcade travels past him in Indianapolis, Sept. 27, 2017.

President Donald Trump delayed Air Force One’s departure from Indianapolis on Wednesday until after he was able to talk with a motorcycle officer who crashed in the motorcade to the airport.

Initial reports said Trump called the officer during the flight back to Washington, but the Indianapolis Metropolitan Police tweeted Thursday that the president delayed the flight.

“#BREAKING: Thank you @Potus for delaying wheels up to speak with injured Officer Turner. #ThankYou,” the tweet read.

Robert Turner, a police officer from Indianapolis, broke an ankle in the fall on Interstate 70. A photographer captured the officer on the ground with his uniform ripped.

Police released a cellphone video of Turner in the hospital taking the call from the president. He was wearing a neck brace, but laughed and appeared to be in good spirits.

The White House initially said Trump called during the flight back to Washington to check on the officer’s condition and thank him for his service.

Trump was in the city to push his so-called “middle class miracle,” and sell his plan to overhaul the nation’s tax code and revive his legislative agenda.

“This is a revolutionary change and the biggest winners will be the everyday American workers as jobs start pouring into our country, as companies start competing for American labor, and as wages start going up at levels that you haven’t seen in many years,” Trump told supporters at the Indiana State Fairgrounds.