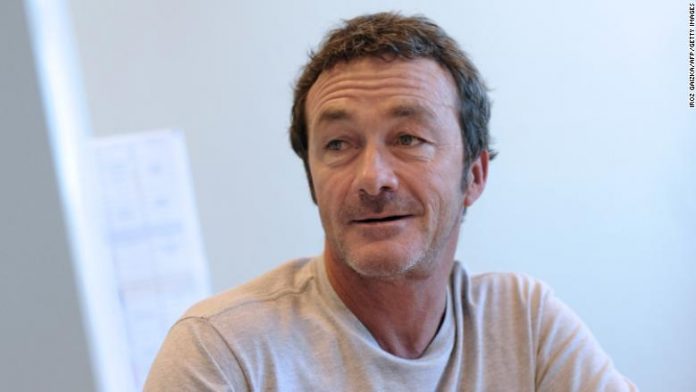 The head of surfwear brand Quiksilver is missing in the Atlantic Ocean after his boat was found washed up on a French beach.

Pierre Agnes — the CEO of Boardriders, Quiksilver’s parent company — set out aboard his motorboat on a routine fishing trip on Tuesday morning from Capbreton, a surfing resort in southwestern France.

French authorities deployed four vessels and four helicopters on Tuesday to search for him after the boat was discovered run aground and empty on a beach along the French coast north of Biarritz.

“The Boardriders family and entire surfing world are devastated by this news,” the company said in a statement Tuesday. “We are concentrating on working with the local authorities on the search and rescue effort and supporting Pierre’s family.”

The local coast guard said it had suspended the search for Agnes on Tuesday night and would resume the operation on Wednesday morning.

Agnes often goes fishing in the morning on his “beloved boat” to start his day, Boardriders said. He lives in Capbreton, his hometown, with his wife and three children.

His disappearance caused consternation in the surfing community around the world.

“I’m praying for a miracle but it’s just starting to hit me what a profound effect this man had on my life and the surf community at large,” wrote Slater, who used to be sponsored by Quiksilver.

In a statement, the World Surf League noted the “deeply concerning reports” about Agnes’ disappearance.

“Our thoughts and prayers are with his friends and family all at this time, as well as the search and rescue teams,” it said.

Related: Quiksilver is merging with Billabong

Agnes recently oversaw a deal that brought Quiksilver together with rival surf brand Billabong under the Boardriders umbrella.

Quiksilver and Billabong both started out in Australia more than 40 years ago and used surf culture to sell clothing around the world.

Their popularity peaked in the 1990s, when their board shorts were a common sight on beaches from Bondi to Hawaii. But they both ran into trouble more recently with sinking sales and profits.

Quiksilver filed for bankruptcy in 2015. It was bailed out by Oaktree Capital Management, a Los Angeles-based investment firm that specializes in buying companies in financial difficulties and turning them around.