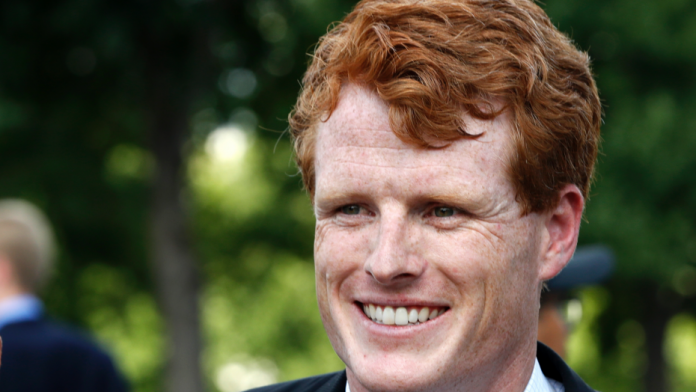 WASHINGTON –  Soaring stock prices under President Donald Trump have boosted investor portfolios and corporate profits but failed to give workers their fair share of the reward, Massachusetts Rep. Joe Kennedy III said Tuesday in the Democratic response to Trump’s first State of the Union address.

Kennedy called on Americans to reject the extreme partisanship and “chaos” of the Trump era. In an apparent reference to Trump, Kennedy said “bullies may land a punch” and leave a mark but have “never managed to match the strength and spirit of a people united in defense of their future.”

In a hard-hitting speech for a political newcomer, Kennedy decried a rollback of civil rights protections, noting proposals that target Muslims, transgender people and others.

The administration “isn’t just targeting the laws that protect us — they are targeting the very idea that we are all worthy of protection,” Kennedy said in a speech from a vocational high school in Fall River, Massachusetts, a onetime manufacturing hub now struggling with high unemployment and other problems.

Trump’s record is “a rebuke of our highest American ideal: the belief that we are all worthy, we are all equal and we all count — in the eyes of our law and our leaders, our God and our government,” Kennedy said.

Kennedy, 37, a three-term congressman and grandson of former Attorney General Robert F. Kennedy, has urged Democrats to focus on the economic worries of working-class voters who bolted the party in the 2016 elections.

Fall River demonstrates the value of that message, Kennedy said.

“Fall River has faced its share of storms. But people here are tough. They fight for each other. They pull for their city,” he said.

The red-haired Kennedy was elected to the House in 2012, returning the family to Congress two years after the retirement of Rhode Island Rep. Patrick Kennedy, the son of Joe Kennedy III’s great-uncle Ted.

The selection of Kennedy, known mostly for his famous last name, has been criticized by some as tone-deaf at a time when the sexual harassment of women and the Black Lives Matter movement are at the forefront of Democratic politics.

Speaking without a suit coat in front of a rebuilt car and an enthusiastic audience, Kennedy tried to defuse that Tuesday by citing the #MeToo movement and declaring, “Black lives matter.”

In a nod to “Dreamers,” the 700,000 young immigrants brought to the U.S. as children and now here illegally, Kennedy spoke in Spanish as he said Dreamers are a part of America’s story and promised that Democrats will not walk away from them.

Kennedy said Trump and his administration were breaking a core promise of America — that everyone will be treated equally under the law. He accused the administration of “callously” appraising Americans’ worth and deciding “who makes the cut and who can be bargained away.”

Under the leadership of Trump and congressional Republicans, Americans are “bombarded with one false choice after another,” Kennedy said. “Coal miners or single moms. Rural communities or inner cities. The coast or the heartland.”

Democrats “choose both,” Kennedy said, outlining a Democratic vision that promises a “better deal for all who call this country home.”

A former Peace Corps volunteer, Kennedy was an assistant district attorney in two Massachusetts districts before being elected to Congress. He has focused on economic and social justice in Congress and has advocated on behalf of vocational schools and community colleges and championed issues such as transgender rights and marriage equality.

To illustrate that message, Kennedy invited U.S. Army Staff Sgt. Patricia King, a transgender woman, as his guest to the State of the Union. King, an infantry squad leader at Fort Lewis, Washington, was the first person to have sex reassignment surgery paid for by the military.