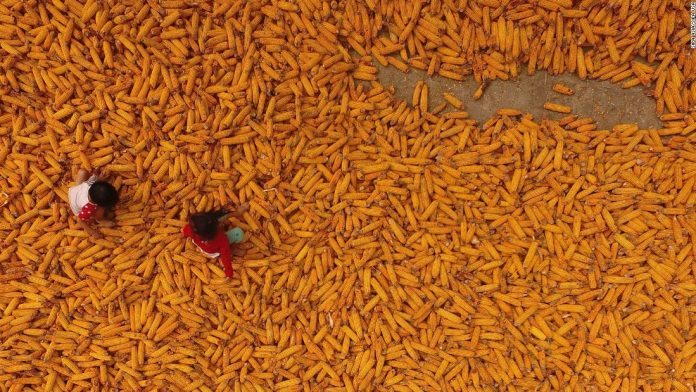 A baby baboon named Kito clings to his mother at the Oakland Zoo in California on Wednesday, September 27. Kito is the fourth baby born to his parents, Krista, 21, and Martijn, 16, making Oakland Zoo’s 16-strong baboon troupe the largest in the United States.

US President Donald Trump boards Air Force One at the airport in Morristown, New Jersey, on Sunday, September 24.

A model displays a creation from the Dolce & Gabbana Spring/Summer 2018 show during Fashion Week in Milan, Italy, on Sunday, September 24.

A spider is seen in a dewdrop-covered web on a hillside near Elkton in rural western Oregon on Wednesday, September 27.

A man looks on during the International Tattoo Convention in London on Friday, September 22. The convention hosts more than 400 of the most prominent and talented tattoo artists on the planet, showcasing their skills and styles in public.

Kids play on stacks of corn during the harvest season in Liaocheng, a prefecture in China’s western Shandong province, on Monday, September 25.

Fighters of the Hashed al-Shaabi, or Popular Mobilization Units, flash the victory sign while advancing toward the northern Iraqi town of Sharqat on Friday, September 22.

An ultra-Orthodox Jewish man swings a chicken over his head as part of the Kaparot ritual in Jerusalem on Wednesday, September 27. Observant Jews believe the ritual of swinging a live chicken over one’s head transfers one’s sins from the past year into the chicken. Kaparot is performed before Yom Kippur, the holiest day in the Jewish calendar.