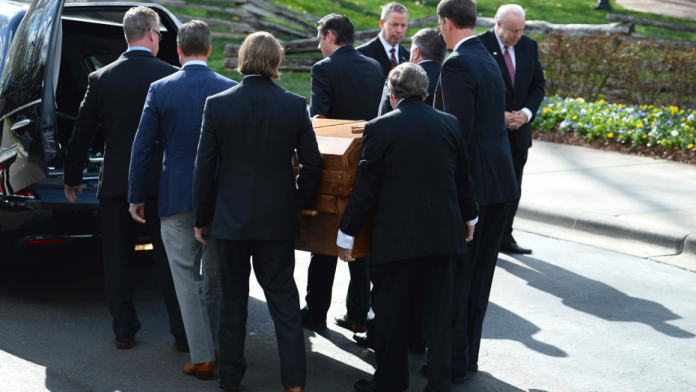 CHARLOTTE, N.C. –  The Latest on those paying respects to the Rev. Billy Graham in Charlotte (all times local):

Hundreds of people have begun paying respect to the late Rev. Billy Graham at his restored boyhood home in North Carolina.

Graham’s body, in a casket made by prison inmates, was in the parlor of the home Monday and will be there Tuesday. People of all ages and races arrived as light rain fell at Graham’s library when the gates opened.

Cecily Turner of Queens, New York, flew to Charlotte on Sunday to make sure she thanked the man she said saved her mother’s soul.

The 72-year-old grandmother of four says Graham’s 1957 crusade at New York’s Madison Square Garden means her soul is saved, as well as the souls of her five children.

Graham died Feb. 21. His body will be at the U.S. Capitol Wednesday and Thursday before Friday’s funeral in Charlotte.

A four-day period for the public to pay respects to the late Rev. Billy Graham is beginning at his boyhood home in North Carolina.

Mourners will file past Graham’s body starting at 8 a.m. Monday. The man called “America’s Pastor” is lying in repose in a closed casket at the home his father built in 1927 on their Charlotte dairy farm, which was long ago swallowed by urban sprawl. It was moved and restored by his library and is on the same campus as the Billy Graham Evangelistic Association.

Graham’s body will spend two days at his library and then lie in honor at the U.S. Capitol Wednesday and Thursday. Graham’s funeral is Friday in North Carolina with President Donald Trump and others expected.