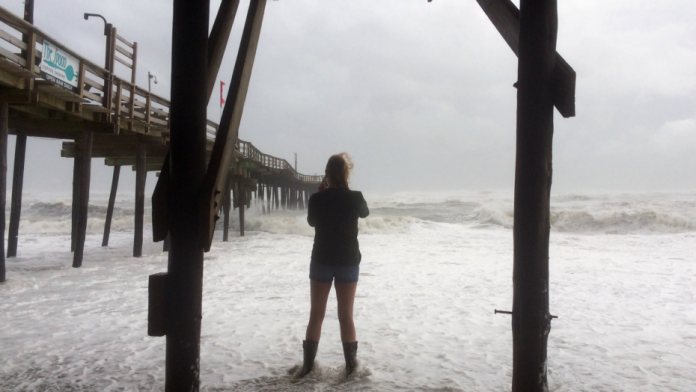 Maria has weakened to a tropical storm as it moves out to sea in the Atlantic.

The storm’s maximum sustained winds decreased Thursday morning to near 70 mph (110 kph) with little change in strength expected over the next two days.

In North Carolina, officials expected conditions to improve quickly on the Outer Banks as Maria races east, so schools can reopen, sand can be removed from roads and the ferries that provide access to Ocracoke Island can begin running again.

Maria is finally racing east in the Atlantic, giving the United States and the Caribbean a rest from the constant threat of tropical weather for more than a month.

No injuries have been reported on the U.S. mainland with Maria. The storm mainly lashed North Carolina’s fragile Outer Banks, with high water and waves pounding the islands from both sides.

Officials say the water at times washed over the only highway connecting Hatteras Island to the mainland.

Officials expected conditions to improve quickly Thursday on the Outer Banks as Maria raced east, so schools could reopen, sand could be removed from roads and the ferries that provide access to Ocracoke Island can begin running again.