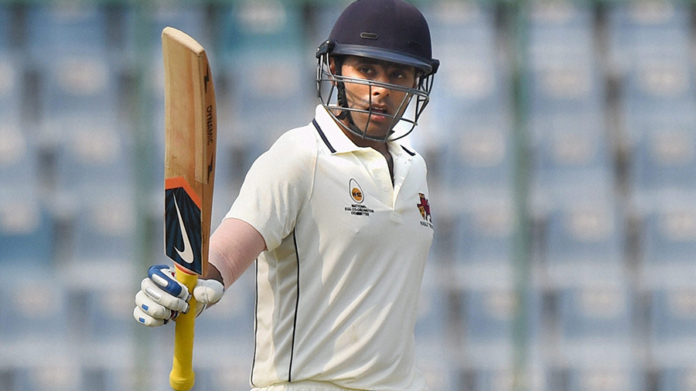 For three-fourths of the day, Tamil Nadu were run ragged and faced the risk of being dispirited, but a burst of energy in the early part of the final session, led by Vijay Shankar and Aushik Srinivas, produced three wickets to leave Mumbai on 171 for 4 at stumps. Tamil Nadu have at best achieved only a semblance of parity considering they haven’t posted a big total themselves – they added only 44 runs to their overnight score of 261 for 6.

However, with Suryakumar Yadav (73) and Praful Waghela (48) counter-punching their way to 121 runs after the fall of debutant opener Prithvi Shaw in the first over, it’s an outcome Tamil Nadu won’t mind.

That Mumbai didn’t slip any further was thanks to an unbroken 41-run partnership between captain Aditya Tare and Shreyas Iyer, who came into bat at the fall of the fourth wicket instead of his customary position at No.3. But before their sensible approach and the team’s wobble, it was Suryakumar and Waghela who ensured Tamil Nadu couldn’t exploit the advantage of the early wicket.

Both batsmen were unforgiving when the seamers bowled full, and Suryakumar, in particular, wasn’t afraid of hitting the ball in the air. When Aswin Crist banged one in short, Suryakumar simply swivelled around and swatted it over fine leg for six. Mumbai hit high gear and stayed there – they were 39/1 in 10 overs, 60/1 in 15 and 81/1 after 20 – but not once did they attempt to over-reach. Suryakumar had volunteered to bat at No.3 and realised the need for him to dominate the bowling.

“I told the coach I would take responsibility at No.3 and play the way he does rather than just look to stay out there,” he said. “That’s what I did because runs were important. I didn’t do anything extra, but got an opportunity to bat at No.3 so I had to try to emulate him.”

Tamil Nadu’s seamers were being carted around, which prompted R Ashwin to tweet that the “seam on the ball is not standing up, the wrist position or the ball is surely not right.” Meanwhile, Tamil Nadu had introduced left-arm spinner Aushik Srinivas in the 19th over, and it proved to be a defining change. He bowled eight overs for 11 runs in an uninterrupted spell before tea before switching ends after the break when Shankar was given the ball.

Suddenly there was a conspicuous buzz in the field, especially with Shankar was getting the ball to reverse, like how Mumbai’s seamers had done in the final session on Sunday. This time Ashwin tweeted that the “seam is sitting up when Vijay Shankar is bowling and things are happening.” With runs being dried up – only 14 runs had come in eight overs after tea – something had to give and Suryakumar went for an expansive drive outside off and was caught behind. In the next over, Waghle responded to Tare’s call for a run, but despite a dive and a mediocre throw from Abhinav Mukund, he found himself short by inches. Two balls later, Siddesh Lad drove Aushik uppishly only for Abhinav to complete the catch at short extra cover.

Suryakumar rued his shot selection, but credited Tamil Nadu’s disciplined bowling. “They were planning to bowl on one side and I had to play out that half-an-hour period,” he said. “Vijay Shankar was bowling well at that time. He was bowling around 120-125. On such wickets, bowlers who move the ball at that pace trouble the batsmen.

Much of the energy Suryakumar referred to came through some colourful chatter from Dinesh Karthik which was almost exclusively in Tamil. When someone bowled at a good pace, for instance, he would refrain from saying as much in English and instead use “azhagana vegam (that’s the right pace), a phrase that is hardly used in casual conversation. Shankar admitted that sometimes the team stuck to Tamil to ensure the opposition didn’t understand. “It is mostly just to get everyone together,” he said. “Most of the time we speak in Tamil. It’s a great opportunity for everyone playing semifinals, so we just want to enjoy it.”

Shankar played a key role with the bat as well in the morning, but he was out chasing a ball outside off soon after his fifty. His dismissal led to the lower order unravelling quickly. “I was really disappointed with the way I got out,” he said. “My intention as to build partnerships with the tail-enders and it was my mistake. Maybe I played a bad shot.”

Arun Venugopal is a correspondent at ESPNcricinfo. @scarletrun