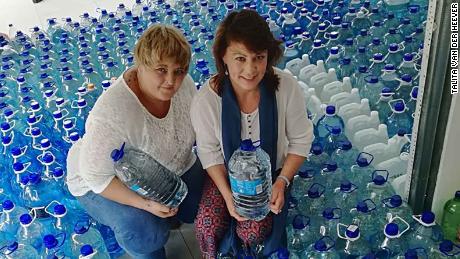 The campaign’s founder, Talita van der Heever, a resident of the South African city of East London, was feeding her 18-month-old daughter with baby formula when she read about “Day Zero” and had a sudden realization.

“You cannot mix baby formula without water, so there are many mums in Cape Town who won’t be able to feed their babies,” she told CNN.

Determined to do something about it, van der Heever recorded a message on WhatsApp and sent it to around 300 people she knew in East London.

The message was simple: we need to help Cape Townians before it’s too late.

“I went to the bathroom, flushed my toilet and recorded it on my phone saying, ‘This sound of toilet flushing and tab opening is the sound we take for granted in our everyday life, and in Cape Town this sound is going to disappear soon,'” van der Heever said.

People in East London were asked to donate two five-liter jugs of water to Cape Town and offer access to drop-off points across the city. Van der Heever also came up with a savvy plan to carry the water to Cape Town, using her inside knowledge of the farming market.

“I grew up in a farm,” she said. “Farmers that bring their produce to East London, Johannesburg, Durban, their trucks go back to Cape Town empty. So I thought that maybe they can carry the water with them.”

Thanks to social media, the response was overwhelming.

In less than 24 hours, van der Heever’s WhatsApp account was inundated with requests from people and companies wanting to donate water bottles, farmers pledging to transport water on their empty Cape Town-bound trucks at no charge, and businesses offering their premises as drop-off points.

“My phone doesn’t stop ringing. Every time someone sends me a message on WhatsApp, by the time I finish reading it it’s already moved down another 100 messages,” van der Heever said.

Soon, she started receiving requests from other parts of South Africa, including Durban, Johannesburg, Bloemfontein and even outside the country’s borders, from Namibia. She told CNN that 60 tons of water have already been collected in Durban, 90 in Johannesburg, 30 in East London, and so on.

Drop-off points were organized across these cities, with the help of a nationwide disaster-relief charity, Gift of the Givers, which just launched the “Water 4 Cape Town” campaign on social media with the help of van der Heever and others.

“Collection of 5L bottled water has already commenced in earnest at more than 70 collection points throughout South Africa,” Gift of the Givers said in a press release.

In some cases, van der Heever’s campaign has prompted companies to organize the donation, offload and delivery all by themselves.

Moynene Boucher, owner of a courier company based in Johannesburg with a branch in Cape Town, says she was inspired to do something after a colleague sent her van der Heever’s voice message on WhatsApp.

“We started a drive to transport donated water to our Cape Town branch for distribution to old-age homes, as well as Water Shortage South Africa,” Boucher said, referring to the drought-relief organization.

“We transport the water at no charge. The crisis is much worse than the world realizes. I’ve since joined Talita’s effort to offer our assistance. And since last Tuesday, we have moved about 10,000 liters of water to Cape Town, and counting.”

Vacant stores are used to warehouse the water, though there is never enough room. “We don’t have enough space to store the water coming down,” van der Heever said.

Schools in East London, Johannesburg and Durban are also involved in the campaign. “Many teachers asked me where to drop water so I asked them: Can you be a drop-off point?” van der Heever said.

Pupils were also asked to write a letter of hope on the bottles for their Cape Town counterparts.

As the campaign gets bigger, a Twitter account dedicated to #Water4CapeTown is now urging people to change their profile photo to keep raising awareness

Imtiaz Sooliman, chairman of Gift of the Givers, told CNN the overall water collection across South Africa topped 50,000 five-liter bottles, and donations are starting to come from abroad, including the US.

“But this is just the tip of the iceberg. Every day the campaign is getting bigger and bigger. We have more than 70 distribution points. And we’re preparing to look at providing trains to transport water across the country.”