Welcome to The National Today newsletter, which takes a closer look at what’s happening around some of the day’s most notable stories. Sign up here and it will be delivered directly to your inbox Monday to Friday.

Paying the piper in Saudi Arabia

Saudi Arabia has officially ended its anti-corruption blitz after extracting more than $130 billion from some of its richest citizens.

Saudi Arabia’s anti-corruption blitz, launched by Crown Prince Mohammed bin Salman in November 2017, has netted more than $130 billion from some of its richest citizens. (Saudi Press Agency via AP)

Most now appear to have purchased their freedom.

The forfeitures, should they end up in government accounts, will more than fill the sizeable hole in Saudi Arabia’s books — a deficit pegged at 195 billion riyals ($64 billion) in the recently announced 2018 budget. 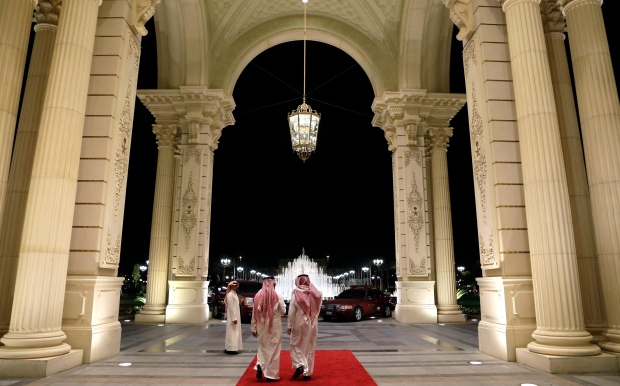 And there is probably more recaptured revenue to come, with 56 wealthy individuals still in custody.

Years of low oil prices have taken their toll on the Kingdom’s finances, with budget deficits reaching as high as 15 per cent of GDP in 2015. (The all-time high in Canada was just over 5 per cent in 1950.)

And despite the modest market recovery for crude, analysts predict that Saudi Arabia’s economy will remain sluggish for at least the next few years, weighed down by government spending and a ballooning public debt. 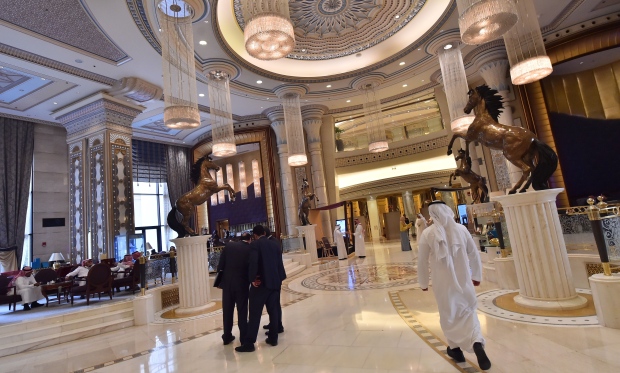 The opulent Ritz-Carlton Hotel in the Saudi capital housed 325 prominent and wealthy Saudi Arabians held as part of the investigation, including a dozen members of the royal family. (Giuseppe Cacace/AFP/Getty Images)

The Crown Prince’s Vision 2030 program, a large-scale effort to modernize Saudi society and diversify the economy, is supposed to address those challenges. But many observers have questioned whether his corruption crackdown is motivated by altruism or greed.

Among the detainees freed after agreeing to settlements this past weekend was Waleed al-Ibrahim, the owner of MBC, a powerful satellite TV broadcaster that is home to such hits as Oprah, and Arabs Got Talent. The Crown Prince has been in negotiations to buy the network for almost two years, when he suddenly jailed most of its board this past November.

Saudi Arabian billionaire Prince Alwaleed bin Talal in the suite where he was detained at the Ritz-Carlton hotel. Released Saturday, the 62-year-old prince had been the most well-known detainee. (Katie Paul/Reuters)

Others who were rounded up, like billionaire Prince Alwaleed bin Talal who was also freed on Saturday, were seen as potential rivals to the 32-year-old Crown Prince, who hopes to inherit the throne from his 82-year-old father, King Salman.

Still, it seems likely that the forfeitures will be popular with less well-to-do Saudi subjects, who have seen a doubling of gas prices, and the imposition of a 5 per cent value-added-tax, as austerity measures so far this year.

Although the King found a way to cushion those blows, ordering a special payment to government employees as compensation — a stipend of 1,000 riyal ($328 CDN).

King Salman’s own net worth is estimated at more than $20 billion.

Russian President Vladimir Putin had to be complicit in his country’s state-sponsored Olympic doping program, says the man who oversaw the effort.

Grigory Rodchenkov, the former director of Russia’s main anti-doping laboratory in Moscow, made the allegations in a documentary aired last night by German television network ARD. 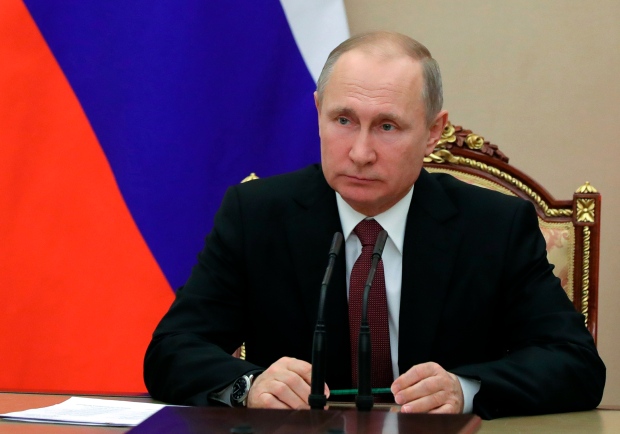 The cheating stretched back to at least the 2008 Beijing Games, he says.

“Of course it came right from the top, from the president. Because only the president can appoint the domestic secret service FSB for such a specific task,” said Rodchenkov.

The ex-bureaucrat now lives in the United States under the witness protection program. Rodchenkov told the broadcaster that he reported to the deputy sports minister, who passed all information and test results to his boss Vitaly Mutko, who in turn kept the Russian president in the loop. 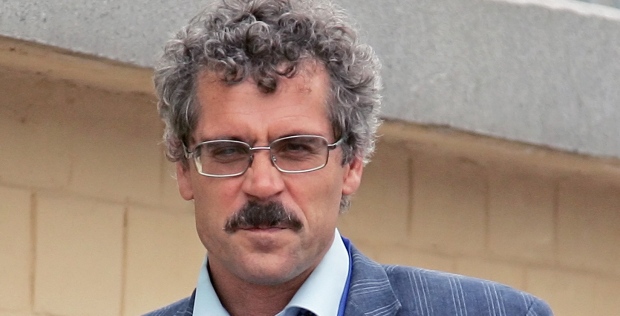 It was at Russia’s national drug-testing laboratory that lab director Grigory Rodchenkov, seen in this 2007 photo, conducted pioneering research into steroids and gave Russian athletes a ‘cocktail’ of banned substances. (EPA/Reuters)

“Because Putin wanted to know everything,” alleges the whistleblower.

A spokesman for the president dismissed the claims as “slander.”

Then today, Putin himself weighed in, calling Rodchenkov “a jerk.”

“Everything is based on the statements by this man who can hardly be trusted in any way,” said Putin, again denying any state involvement in the cheating scheme.

The finger-pointing perhaps overshadows even more serious allegations made in the ARD documentary — that the World Anti-Doping Agency’s supposedly “tamper-proof” sample bottles are actually remarkably easy to mess with.

The new containers, introduced after Canadian lawyer Richard McLaren’s report documenting how the Russians opened the old ones in Sochi to exchange dirty urine for drug-free samples, simply pop open when frozen, says the network. 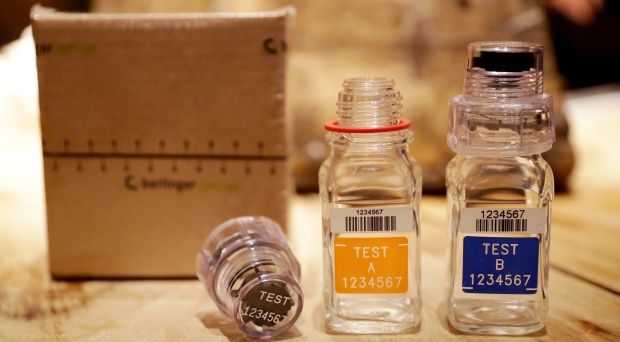 WADA has launched an investigation, and the International Olympic Committee has expressed its “concern” about the integrity of anti-doping tests at the upcoming Pyeongchang Winter Games.

Meanwhile, speed skater Olga Graf has become the first Russian athlete to turn down a ticket to this year’s Winter Olympics.

The two-time Sochi bronze medallist today announced that she will not accept a spot on the “neutral” team that will be allowed to compete in South Korea.

Olga Graf, Russia’s two-time Sochi bronze medallist, today announced she will not accept a spot on the ‘neutral’ team that will compete in South Korea. (Vasily Fedosenko/Reuters)

“All my hopes to compete for the Olympic podium are fated not to be realized because sport has become a bargaining chip in filthy political games,” Graf wrote on social media.

“I’m happy that the IOC commission declared me a clean athlete, which I am, but I am saddened that more than half of our national speed skating team didn’t get invited,” she added. “Since we have been deprived of the chance to fight for the Olympic podium in the team sprint, I don’t accept the IOC invitation.”

Colombia’s five-decade-long civil war appears to be back on following a new spate of bombings and the suspension of peace talks.

Colombian President Juan Manuel Santos announced an end to negotiations with the Marxist National Liberation Army (ELN) yesterday, after a trio of blasts over the weekend killed seven police and left more than 45 more wounded. 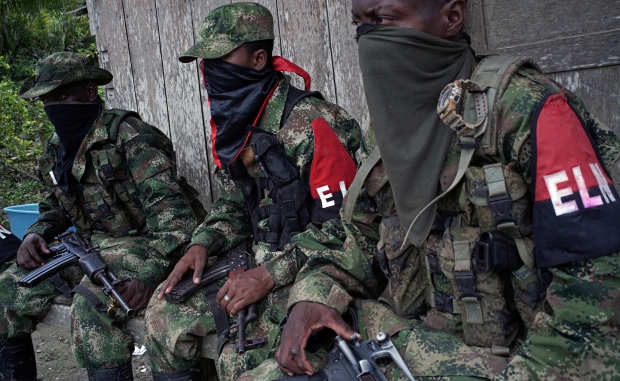 Rebels from Colombia’s Marxist National Liberation Army (ELN), seen in the northwestern jungles of Colombia in August. The ELN claimed responsibility for a trio of blasts over the weekend that killed seven police and left more than 45 wounded. (Federico Rios/Reuters)

Santos won the 2016 Nobel Peace Prize for negotiating a deal with Colombia’s largest guerrilla faction, the Revolutionary Armed Forces of Colombia (FARC). He has been trying to come to a similar arrangement with the holdout ELN.

An agreed-upon ceasefire came to end earlier this month when the group’s leader, Nicolas Rodriguez Bautista (better known as “Gabino“), refused to extend it.

Not that the supposed pause in hostilities had made much difference.

Violence in Colombia’s heartland has continued almost unabated since FARC pulled its 11,000 guerillas from the field in early 2017, and rival groups and criminal organization began to battle for control of the country’s cocaine trade.

“In the Pacific cocaine hub of Tumaco, in hamlets of Chocó, or in contraband zones on the Venezuelan border, established armed groups and new insurgent breakaway factions have attacked state forces, intimidated communities and vied to become undisputed local overlords,” reads a recent report by the International Crisis Group, an independent peacemaking organization.

Colombian high peace commissioner Camilo Gomez, centre, with ELN commanders Nicolas Rodriguez Bautista, left, and Oscar Santos, in the San Lucas mountains in 2001. Negotiations between the government and ELN have dragged on for years with no lasting peace. (Reuters)

The Colombian government’s response, a “Victory Plan” that has seen the deployment of  some 80,000 police and soldiers to the former FARC territories, has hardly helped, notes the group.

“Even if security forces could seize all disputed territory, coercion alone cannot establish bonds of trust between the state and local citizens.”

The ELN was never as well organized as its larger guerrilla rival, and has consequently proven much harder to negotiate with.

It’s a contrast that was again driven home over the weekend, when Rodrigo Londono, the former FARC commander known as “Timochenko,” launched his presidential campaign in Bogota.

Londono, who was convicted of political kidnappings, bombing police stations and raising a child army, is in the midst of an unlikely democratic transformation, with smiling and vaguely professorial-looking campaign signs, and promises to fight corruption and improve social programs.

FARC has similarly abandoned its old crossed-rifle logo in favour of a bright red rose.

Congressional elections are scheduled for March, and the presidential race concludes in May. Santos, who has served two terms, is constitutionally barred from running again.

But one thing seems clear — the person who inherits the job will be dealing with many of the same issues that have bedevilled Colombia’s leaders since 1964.

Some 220,000 people have died over the past five-plus decades of fighting, and more than 1 million have been displaced from their homes.

Quote of the moment

“Today is the first step in doing away with election autocracy in our country and establishing proper democracy.”

– Kenyan opposition leader Raila Odinga, after having himself sworn in as “the people’s president” at a large rally in Nairobi today. President Uhuru Kenyatta was sworn in for a second term in October, following a disputed vote. The government warned local media that covering Odinga’s “inauguration” was tantamount to treason.

What The National is reading 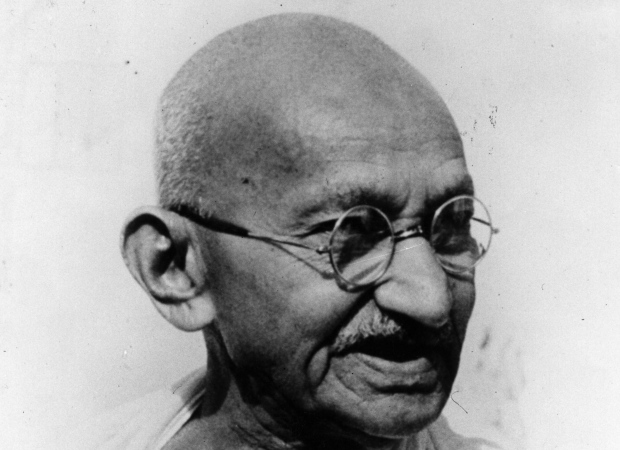 Seventy years ago today, a man in a khaki coat walked up to Gandhi, pulled out a pistol and shot him several times in the chest. The sound “was like a Chinese cracker that a child might have set off,” Robert Stimson, a BBC correspondent who was at the scene, relates in this radio report. But the wounds proved deadly all the same.

And in the aftermath, Gandhi’s followers failed to follow his directive of non-violence. “I saw flailing arms beating on [the killer’s] head and shoulders and soon there was blood on his face,” said the BBC’s man:

Sign up here and have The National Today newsletter delivered directly to your inbox Monday to Friday.