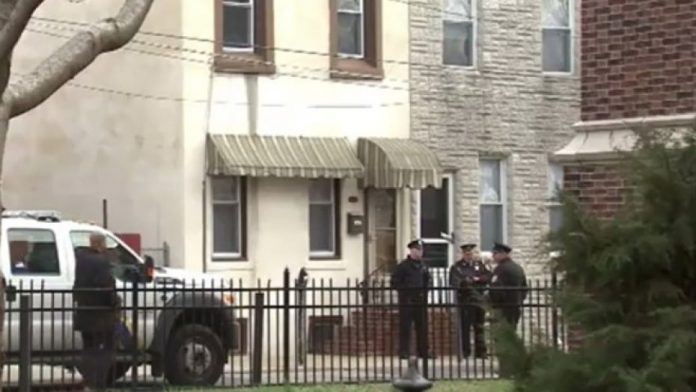 Feb. 26, 2018: A veteran Philadelphia police officer and a man were found dead at this home in the Port Richmond neighborhood of the city.

A veteran Philadelphia police officer who was described by her neighbors as always “keeping an eye on the block” has been mysteriously found dead along with a man inside a home in the northeast part of the city.

The body of the off-duty officer – who police have only identified as a female who worked for the department for 14 years – was found around lunchtime Monday in Port Richmond.

“We usually don’t have stuff like this going on around here, so something like that it’s a bit of a shock,” neighbor Timothy Callahan told WPVI. “I just want to know what happened.”

The causes of death have not been released and police say there was no immediate evidence of foul play, according to the Philadelphia Inquirer. Autopsies and toxicology tests will be performed on the officer and the man, who also has not been identified.

But a neighbor told Fox 29 that they heard loud yelling during a late night dispute at the house a few weeks ago.

Friends of the 36-year-old officer reportedly said that the man, 42, was a longtime acquaintance of hers. Fox 29 identified the man as her boyfriend.

“She was nice, she was friendly, relatively outgoing. She would talk to you,” one neighbor, Richard Yuill, said in an interview with the station.

The home where the officer was found dead belongs to her, the Philadelphia Inquirer reported, citing property records linked to a name that neighbors provided.

“She was always keeping an eye on the block,” Matt Cuevas, who lives a few doors down, told the newspaper. “If anybody had any problem, she would say let her know.”

Family and friends on Monday gathered as the bodies were taken out of the home. Police there towed away a car with New York license plates and discovered her dead after she failed to show up for work or answer her phone.

Cuevas also said the officer coached a women’s softball team and recently adopted a pit bull that was being used in dog fights.

“She treated the dogs like her children,” he added.