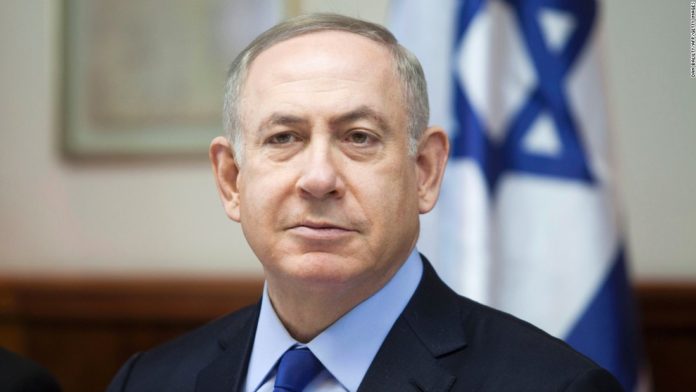 The conference, which is being attended by representatives from some 70 countries, began Sunday with the aim of bringing both sides to the negotiating table and maintaining support for a two-state solution.

“They emphasized the importance for the parties to restate their commitment to this solution, to take urgent steps in order to reverse the current negative trends on the ground, including continued acts of violence and ongoing settlement activity,” the closing statement from the conference read.

Any two-state solution should satisfy both sides, the statement said. That includes recognizing Palestinians’ sovereignty and their right to statehood, as well as Israel’s security needs, while ending “the occupation that began in 1967” and resolving all “permanent status issues” based on UN Security Council resolutions.

Among the permanent status issues are Jerusalem, Palestinian refugees, settlements, security and borders.

Israel Prime Minister Benjamin Netanyahu told his Cabinet on Sunday that the conference was coordinated by the French and the Palestinians and sought to “force terms on Israel that conflict with our national needs.”

He seemed to welcome the inauguration of American President-elect Donald Trump later this week, saying, “This conference is among the last twitches of yesterday’s world. Tomorrow’s world will be different — and it is very near.”

Israel’s Ambassador to the UN Danny Danon also slammed the conference, saying it “is so detached from reality that it has extended a hand towards Palestinian obstructionism instead of towards peace.”

Echoing Netanyahu’s sentiments on working with Trump, he added, “In the next few weeks we will enter a new era and work with the incoming US administration to undo the damage caused by the Security Council resolution and these other one-sided initiatives.”

Meanwhile, Palestinian President Mahmoud Abbas welcomed the conference at the opening of the Palestinian embassy in the Vatican on Saturday.

“We praise the role of President (Francois) Hollande and the French government in organizing this international conference, and we call upon the participants to take concrete measures in order to implement international law and UN resolutions,” Abbas said.

The talks, hosted by France, were aimed at restarting some level of negotiations after the last round of talks collapsed in 2014.

French Foreign Minister Jean-Marc Ayrault told delegates that preserving the two-state solution is an “emergency” in the face of threats by “colonization” and continued violence.

“The parties remain very distanced in a relationship of defiance, which is particularly dangerous, and no one is immune to a new explosion of violence.”

Speaking as “a friend of Israel,” the foreign minister said the country’s security was of profound concern, but “there will not be regional peace, solid and durable, as long as the conflict with the Palestinians will not be resolved.”

Addressing the timing of the conference, in the final days of President Barack Obama’s administration, Ayrault said, “Well, we have demonstrated that the entire world wishes for peace.”

On France itself recognizing a Palestinian state, Ayrault said it hadn’t really been discussed and that the focus was on bringing the Israelis and Palestinians to the negotiating table again.

“The position of France, and we have precedent in this, is that there is no future of peace in this region of the world if we do not reaffirm the necessity for two states,” he said.

French President Francois Hollande warned that accepting the “status quo” was not an option for the international community and criticized those who believe holding such a conference is naive.

“It would be naive to consider that bridging the gap between Israel and its neighbors, so necessary, is possible without progressing towards peace between Israelis and Palestinians,” he said in a speech.

The Security Council approved the resolution with 14 votes, with the US abstaining.

Israel fears the recommendations of the conference could turn into another Security Council resolution during the Obama administration’s final days.

Netanyahu has made it clear he’s looking forward to working with Trump, who campaigned on a pledge to relocate the US Embassy in Tel Aviv to Jerusalem, a proposal that has caused consternation in the international community.
Arab and European allies have warned the incoming Trump administration that such a move would risk undermining the peace process and lead to further violence in the region.

Ayrault called the proposal a “provocation” and said previous American presidents had put forward this option in the past but ultimately balked.

“The question of Jerusalem,” he said, “can only be discussed in the framework of a negotiation between all parties.”

He said he looked forward to working with Rex Tillerson, Trump’s secretary of state nominee.

Abbas responded to Trump’s pledge by writing the leaders of Russia, China, France, Germany, the United Kingdom, the Arab League and others asking them to stop Trump.

US Secretary of State John Kerry warned such a move could cause “an absolute explosion in the region.” Later, Kerry told reporters that it would have been inappropriate to include mention of Trump’s proposal in the peace conference’s final communique, according to media reports.

Last week, Trump’s transition team floated the possibility of initially having the US ambassador to Israel work and live in the US consulate in Jerusalem, while the American Embassy remains in Tel Aviv.

READ: Trump pushes US Embassy move in Israel amid outcry

Abbas has written to Trump to register his concern over how moving the embassy could shatter any chances of peace.

PLO Secretary-General and chief negotiator Saeb Erekat also confirmed that Russia had been urged to prevent any such move from occurring.

“The Palestinian presidential office have sent a message to all foreign ministries asking them to use all tools to prevent Trump’s decision to relocate the American embassy to Jerusalem. This will put an end to the two-state solution and it crosses all red lines,” Erekat told CNN.