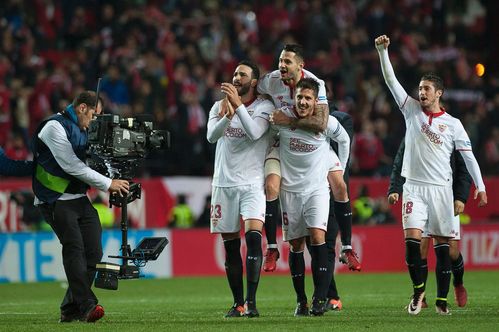 Sevilla’s players celebrate their 2-1 victory at the end of the Spanish league football match between Sevilla FC and Real Madrid CF at the Ramon Sanchez Pizjuan stadium in Sevilla.(Photo: Jorge Guerrero, AFP/Getty Images)

MADRID (AP) — Sevilla grabbed two late goals to end Real Madrid’s 40-game unbeaten streak and move within one point of its rival atop the Spanish league with the 2-1 win on Sunday.

Cristiano Ronaldo gave Madrid the lead by converting a penalty kick in the 67th minute, but Sevilla rallied with an own goal by Sergio Ramos in the 85th.

Stevan Jovetic scored the winner from outside the area two minutes into injury time at Ramon Sanchez-Pizjuan Stadium in Seville.

The result handed Madrid its first defeat since a 2-0 loss at Wolfsburg in April in the quarterfinals of the Champions League last season.

Karim Benzema’s injury-time equalizer against Sevilla in the Copa del Rey match on Thursday had allowed Madrid to break the unbeaten Spanish record that it shared with Barcelona.

Barcelona stayed third after beating Las Palmas 5-0 at Camp Nou on Saturday, while fourth-placed Atletico edged Real Betis 1-0 at home for its third win in a row.