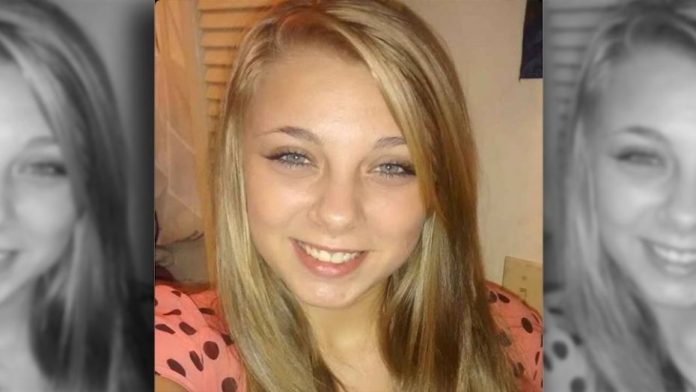 Kaylee Muthart, 20, is blind after she gouged her eyes out while hallucinating earlier this month.

The mother of a South Carolina woman who gouged her eyes out with her hands earlier this month is speaking out on the risks of illegal drug use.

Kaylee Muthart, 20, terrified churchgoers in Anderson County, S.C., after people witnessed the woman removing her eyeballs on Feb. 6, 2018. People reported the woman was hallucinating at the time of the incident.

Fox Carolina reported a few officials “had to subdue her enough so she could start receiving medical assistance.”

“It took two or three of our guys and two EMTs” to subdue her enough that she could start receiving medical assistance, Sheriff Chad McBride of the Anderson County Sheriff’s Office said.

Muthart’s mother, Katy Tompkins, told People that doctors informed her that her daughter was blind from the incident.

SOUTH CAROLINA WOMAN SEEN OUTSIDE CHURCH GOUGING OUT HER EYES WITH HER OWN HANDS, POLICE SAY

“That was a struggle, I can’t even explain that feeling when I found out, it was horrifying. Complete terror,” Tompkins told People. “I was thankful she was alive, but I knew something was wrong with her.”

Tompkins said doctors believed her daughter used methamphetamine laced with another substance which caused her to hallucinate.

Tompkins said Muthart believed “the world was upside down” and she “heard voices that told her to sacrifice her eyes in order to make it to heaven.”

She said her daughter started using methamphetamine last year when she moved out. Tompkins said she tried to get her daughter to get help just days before the incident.

“The day before it happened, which was my birthday, I was getting ready to have her committed, just to get her off the streets and away from it,” Tompkins said. “But I was too late.”

Despite the horrific episode, Tompkins said her daughter is recovering well, but will have a long recovery period.

“She’s been doing wonderfully. Each day at a time, she just gets a little better and better,” she said. “She’s getting all different kinds of treatment, but she’s going to have to re-learn everything. It’s like she’s almost starting life over again.”

Tompkins said her daughter would move back in with her after she is discharged from the hospital. She has set up a GoFundMe page to raise money for a seeing-eye dog for her daughter.

The mother said she has spoken to other parents whose children have struggled with drugs.

“This is something you never think is going to happen to you, but it did,” Tompkins said. “A lot of the mothers I talked to have kids that have been addicted to heroin for 10, 15 years and I’m like, ‘How did you get through it?’ My daughter was doing it for six months and it literally tore me up.”

Tompkins said Muthart would like to tell her story one day to help others.

“I don’t know how I’m getting through it, but she has given me strength. It’s weird to say, but she uplifts me right now and she’s the one that can’t see. That’s just the kind of person she is,” Tompkins said. “I’m thankful. It’s a horrible thing, but I’m still thankful because God spared her life.”