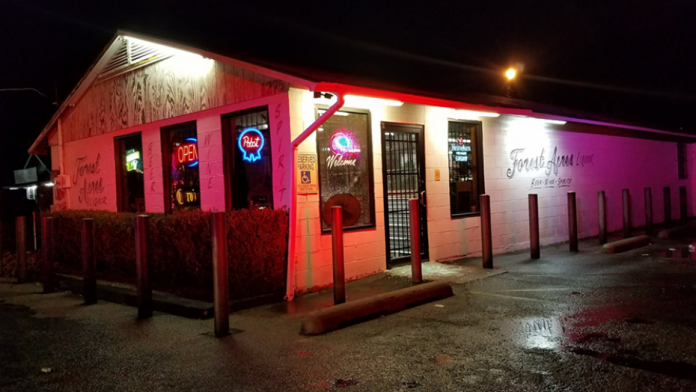 An armed suspect reportedly tried to rob a liquor store in Oklahoma on Thursday night.

Shots rang out during an armed robbery at an Oklahoma liquor store on Thursday night after a man threatened a mother and daughter for the money in the register, Tulsa World reported.

The scary scene happened at Forest Acres Liquor in Tulsa while Tina Ring, 53, and her daughter Ashley Lee, 30, were working, the outlet said.

Surveillance video, obtained by Tulsa World, captured the moment the hooded suspect walked into the liquor store and pointed what appears to be a weapon at Lee, who was behind the counter.

After a brief exchange behind the register, the suspect rummages around before ultimately disappearing from the video. Lee’s mother then appears, at which point Lee grabs something from beneath the counter and hands it to her, the video showed.

Ring told Tulsa World on Friday that during the incident, her biggest concern was Lee’s safety.

“I didn’t want him to hurt my daughter,” Ring said. “That was my main thought.”

“All I was thinking was ‘Just give him the money and go,’ and next thing I know, I see him back in my face,” she added.

The video showed women hiding behind the counter. After the suspect reappeared, Ring appeared to fire a weapon a number of times, continuing as the suspect retreated from the building.

The suspect soon reappeared and, after seemingly getting shot, gets into a physical fight with Ring over the weapon.

Lee then appears to fire a second weapon at the thief, giving herself and her mother the opportunity to leave the building.

“I think I’m still in shock,” Ring told Tulsa World. “I don’t think I have really processed everything yet.”

The suspected robber was identified as Tyrone Lee, a man in his thirties, Tulsa World reported, citing Sgt. Brandon Watkins of the Tulsa Police Department’s robbery unit. The suspect is not related to the store employee, Ashley, the outlet said.

According to the department’s Twitter page, a man “matching his description” turned up at a local hospital with several gunshot wounds.