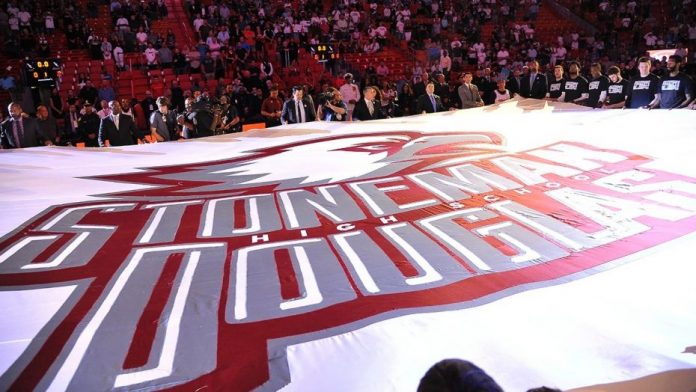 A large banner in memory of the victims of the Marjory Stoneman Douglas High School shooting is unfurled before an NBA basketball game in Miami on Saturday, Feb. 24, 2018.

Marjory Stoneman Douglas came into the tournament as the last seed in the four-team bracket and pulled off two upsets to win the Tier I statewide Amateur Hockey of Florida state title.

The Eagles defeated the top-seeded East Lake High School, 3-1, and defeated Tampa Jesuit High School, 7-4, to claim the championship, according to Sports Illustrated.

In the final against Tampa Jesuit, Adam Hauptman, of Marjory Stoneman Douglas, led the team with three goals, while Matthew Hauptman and Matthew Horowitz scored two goals each.

The championship comes 11 days after a gunman opened fire at the Parkland high school, killing 17 people, including an assistant football coach and the athletic director.

The hockey team had been impacted by the shooting. Jesse Guttenberg, who is a junior varsity member of the team, lost his sister Jaime in the shooting, according to the Sun Sentinel.