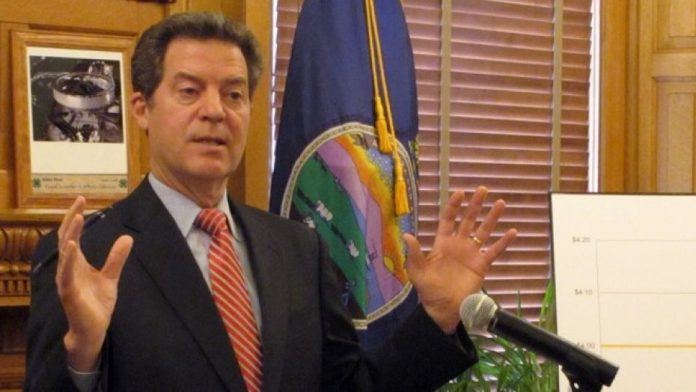 Kansas Gov. Sam Brownback, seen April 2, 2015, is expecting to step down if the U.S. Senate confirms him for an ambassadorship in the Trump administration.

The governor’s race in Kansas is shaping up to be a battle of teenage candidates — plus some adults.

On Thursday, a 17-year-old threw his hat in the ring, becoming the third teenager looking to succeed Republican Gov. Sam Brownback, who is required by law to step down after two consecutive terms.

Ethan Randleas, a Republican from Wichita, is the teen who entered the race Thursday. He was preceded by 16-year-old Democrat Jack Bergeson, also from Wichita, and 17-year-old Republican Tyler Ruzich from Prairie Village.

At least eight non-teenagers are also in the race, the Wichita Eagle reported.

Kansas has no law specifying the qualifications to run for governor. Each student will be able to enter the race by paying a $2,207 fee to file for himself and a lieutenant gvernor running mate. The fee drops to $670 if a candidate collects 5,000 petition signatures.

Randleas told reporters that maybe the state should set limits on who can run, the Kansas City Star reported.

“Maybe it’s 18 (years old), but just some way to make sure we don’t have like a dog run,” Randleas said. “Because I’m sure someone’s going to think about it and be like, ‘Well, you know, might be funny to have my dog run. I’m going to have my dog run for governor.’ And they’ll fork over $2,000 to get it on the primary ballot as a joke.”

Randleas calls himself a “conservatarian,” sharing values of both conservative and Libertarian philosophies.

Brownback was recently nominated to be President Donald Trump’s ambassador-at-large for international religious freedom. He is expected to step down if confirmed by the Senate, and be temporarily replaced by Lt. Gov. Jeff Colyer.

Brownback told reporters Thursday that his confirmation hearing in Washington is set for next Wednesday, the Wichita Eagle reported.

The Associated Press contributed to this article.