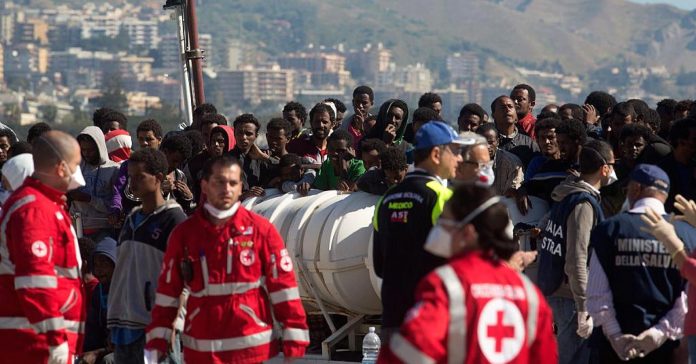 At the height of the crisis, public opinion in Europe was broadly sympathetic to the plight of many migrants, many of whom were fleeing war in the Middle East and poverty in Africa. That sentiment has been eroded due to the sheer number of arrivals, however.

Italy – the euro zone’s third largest economy, but slower to recover from the 2008 financial crisis than other European countries – has particularly struggled to deal with the influx and public and political opinion has turned increasingly negative towards the arrivals.

The tense climate surrounding immigration came to a head in early February after a drive-by shooting that left injured a group of foreign nationals in the town of Macerata. The attack is believed to have been racially motivated and carried out by a neo-Nazi with previous links to the anti-immigration Northern League (Lega Nord) party.

While the party’s leader, Matteo Salvini, condemned the violence, he also noted in a Facebook post that “immigration out of control leads to chaos, anger, social confrontation.”

Also responding to the attack, former prime minister and leader of Forza Italia, Silvio Berlusconi, said that immigration was an “emergency” in the country.

Speaking to national broadcaster Rai Tre, the right-leaning politician, whose party is an ally of the anti-immigrant Northern League, said the number of migrants arriving in Italy was causing “serious social alarm.” He added that the current center-left’s asylum policy was tantamount to a “social timebomb.”

That’s not to say the center-left government has had much of a softer approach to the migrant influx.

Italy’s Interior Minister Marco Minniti, a member of the ruling Democratic Party (PD) has frequently expressed plans to expel more migrants, but doing so can prove difficult and costly in practice.

Last July, Matteo Renzi, former prime minister and head of the PD, said Italy did not have any moral duty to take in migrants, prompting critics to accuse him of taking the position of his right-leaning rivals.

“We need to free ourselves from a sense of guilt. We do not have the moral duty to welcome into Italy people who are worse off than ourselves,” Renzi wrote in new book, excerpts of which were released last year ahead of publication on the PD website and reported by Reuters.

The government has also put off reforms to citizenship laws in Italy, encompassed in the so-called “ius soli” bill, which would create an earlier path to citizenship for children of foreign parents born and schooled in Italy, amid pressure from center-right parties and ahead of the election.

Italy’s most popular singular party in the polls, the anti-establishment 5-Star Movement, has also expressed a tough attitude towards migration.

Former leader Beppe Grillo has said undocumented migrants should be expelled from Italy and its current leader, Luigi Di Maio, likened sea rescues of migrants as a “sea-taxi service” that must be stopped immediately. Di Maio also said in January that the declining birth rate among Italians must not be a reason to favor immigration.