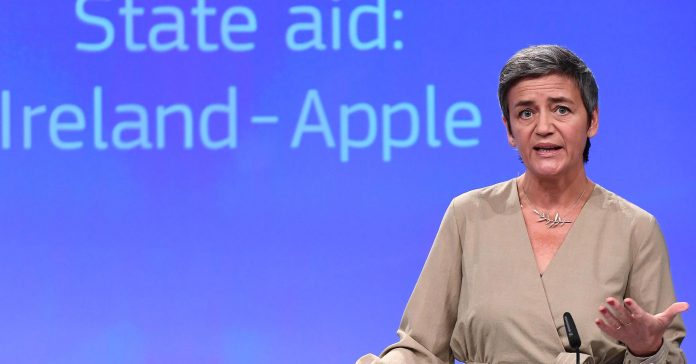 The European Commission will withdraw its complaint against Ireland for not recovering 13 billion euros ($16 billion) in unpaid taxes from Apple, but only if the country recovers that amount in full, the EU’s Competition Commissioner Margrethe Vestager told CNBC.

The EU took Ireland to the European Court of Justice last October for failure to recover the sum from the technology giant, when it was ruled that Apple had benefited from illegal tax benefits in Ireland in August 2016. According to EU law, the recovery of funds should usually take four months after the Commission issued its decision.

“In our opinion, it (recovery of unpaid taxes) has taken too long. But from what I hear from the Irish, they are getting there. So, of course, we hope that soon, the recovery can happen in full, because if that happens we will withdraw the complaint that we have filed with the courts,” Vestager told CNBC in an interview Monday.

Media reports last week suggested that Ireland is calculating how much money Apple needs to pay back and that such calculations should be done before the end of April. So far, the Irish authorities said that their estimations are close to the commission’s 13 billion euro figure.

Speaking to CNBC, Vestager said it has taken Ireland “too long” to recover the money, but she understands that the process is complex.

“Of course, we look at the difficulties that (are) related to the case,” she said. “But it is important for us that it happens, and this is why… On the process alone of recovery, unpaid taxes, we have asked the court to look into it.”

Apple in 2016 was ordered to pay Ireland the record-breaking sum after a ruling by the European Commission found that a “sweetheart” tax deal between Apple and Dublin’s tax authorities broke EU laws.

The illegal tax aid has created tensions between Brussels and Dublin, given that the latter doesn’t want to be seen as unfriendly to business. In 2016, Apple CEO Tim Cook said the EU’s decision would harm future investment decisions in Europe. However, Vestager has downplayed such an impact.

Ireland’s low corporate tax rate of 12.5 percent has been a major point of attraction for multinational investors, who have flocked to the country in their thousands.

Nearly two years after the commission’s decision, the money in unpaid taxes has yet to be transferred. “It’s a question of the level playing field,” Vestager said. “Because to recover unpaid taxes is, of course, to restore competition. And this is why for us it’s very important because it gives other companies a better chance and more competition ends up as a better market to serve the consumers.”