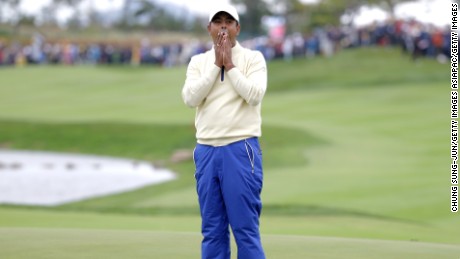 “It allows me to get away from what we call life. I play golf for a living, somebody else drives a taxi for a living, someone else sits in front of a computer. That does not define us — who we are actually defines us.”

Lahiri practices a 2,500-year-old form of Buddhist meditation called Vipassana which means “to see things as they really are.” He’s been doing it since he was 17 years old.

No cell phones or laptops were allowed during the residential course he recently attended in Masschusetts which aims to teach participants the art of self-observation.

It’s a form of mental training which uses breathing techniques to calm the mind and coaches the individual to reflect on their own existence and become more aware of life experiences.

The June retreat was the fourth one for Lahiri, who is now 30 and making his second Presidents Cup appearance.

“My parents had both done it back in India,” added Lahiri, expanding on his interest in meditation. “It’s something very close to my heart and I believe it’s helped me become a better person.

“We all live in a world of black and white, always looking for instant gratification but meditation helps you accept what comes your way.

“Things could be good or bad for you right now but I guess it all eventually pans out. It’s helped me definitely look at life in that light.”

Lahiri was the first Indian player to achieve a top-five finish in a major — at the 2015 PGA Championship — and has won 18 tournaments worldwide.

However, he is yet to experience victory on the US Tour, so has moved to Florida with his wife, Ipsa, to help make that a reality.

Lahiri is convinced that his meditation techniques help him deal with the specific pressures of golf out on the course.

“Self-observation allows you to separate yourself from what’s going on,” he says.

“There are so many times when I can feel the nerves on the 18th hole and my heart beating fast. But once you start observing what’s going on inside you, you’re no longer thinking of what happens if I make that putt or miss that putt.

“It allows me to just ground myself and center myself and then say ‘okay what’s my job at hand? What do I need to do?’ and then you do that.

“Whether the result goes your way or not is not something you can control all the time, but you can definitely control how you respond to it.”

Things certainly did not go Lahiri’s way during his rookie Presidents Cup appearance in 2015 when he lost all three of his matches — most notably his crucial singles contest with Chris Kirk.

That match went down to the 18th green and Lahiri missed a short putt to gift a point to the Americans who then went on to claim their sixth straight victory in the competition.

“I’ve thought a lot about it and when I look back I really have no regrets, Lahiri says.

“I went through my routine, picked a line and made a great stroke. The thought of missing it never crossed my mind. I was completely zoned in but that’s golf.

“You get good breaks and bad ones. Unfortunately, we don’t control the consequences. At the end of the day, it’s made me stronger, helped me mature and come back determined to make a positive impact on the team this time around.”

This is the 12th edition of the biennial Ryder Cup-style event which sees the top US players take on the best the world has to offer outside of Europe.

The Americans have won nine of them — they lost in 1998 and tied in 2003 — and are overwhelming favorites to win again with several major winners in their ranks at the Liberty National course.

Justin Thomas comes into the tournament having just picked up the $10 million FedEx Cup bonus and he will line up alongside a wealth of talent which includes Open Champion Jordan Spieth and world No. 1 Dustin Johnson.

Five-time major winner Phil Mickelson is their lowest ranked player in the squad but Lahiri isn’t fazed by any of his opponents.

“Quite honestly, I’d be happy to go up against anybody. The more accomplished the player, the better because it gives me a bigger motivation for me to go out there and upset him.”

Lahiri loves living in Florida but he misses his home country deeply, especially the food.

Although he has proved himself capable of living without a phone on those meditation retreats, he is very active on social media and keen to show off his Indian heritage with his use of the hashtag, #currypower.

“When I came out west — whether in Europe or the US — everyone was always like ‘when are we going out for a curry?’ So the whole concept of Indian food in the west is curry which isn’t exactly accurate because we have so many different kinds of things.

“But when people talked to me about curry, it just clicked. That became kind of an identity of Indian food or for Indian culture. So for me, when I write #currypower it kind of symbolizes who I am and that’s why I use it.”