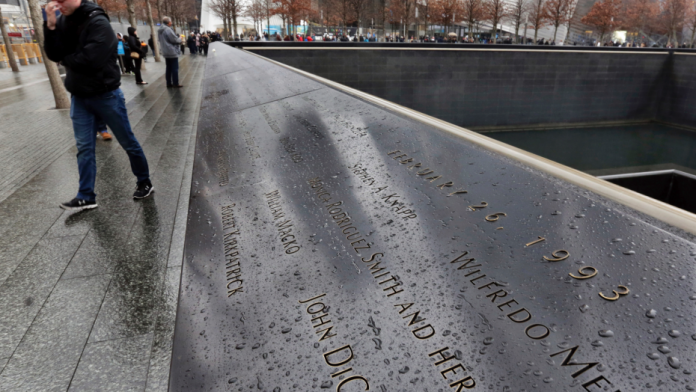 NEW YORK –  Survivors and others are set to gather at ground zero for a solemn tribute to victims of the first terror attack on the World Trade Center, the deadly bombing 25 years ago.

Monday is the anniversary of the blast, which killed six people, one of them pregnant. The planned commemoration includes a Mass at a church near the trade center and a ceremony on the 9/11 memorial plaza, with the reading of victims’ names and a moment of silence at 12:18 p.m., when the bomb exploded and became a harbinger of terror at the twin towers.

“While overshadowed by 9/11, the 1993 bombing represented a pivotal moment in the history of the World Trade Center, in the history of New York City, and, frankly, our own national reckoning with terrorism in a global age,” said Sept. 11 museum president Alice Greenwald, whose institution has a permanent exhibition on the bombing and a special installation to commemorate the anniversary. “It had so many of the elements that we would later come to associate with 9/11.”

The bomb, in an underground parking garage, was set by Muslim extremists who sought to punish the U.S. for its Middle East policies, according to federal prosecutors. Six bombing suspects were convicted and are in prison, including accused ringleader Ramzi Yousef — a nephew of self-proclaimed 9/11 mastermind Khalid Sheikh Mohammed. A seventh suspect in the bombing remains at large.

An estimated 50,000 people fled the blacked-out twin towers, some groping their way down smoky stairs, others rescued from stalled elevators or plucked from rooftops by police helicopters. More than 1,000 were injured.

A memorial fountain dedicated to the 1993 bombing was crushed in the attacks that destroyed the towers on Sept. 11, 2001. But bombing victims’ names are now inscribed on one of the memorial pools that bear the names of the nearly 3,000 people killed on 9/11.