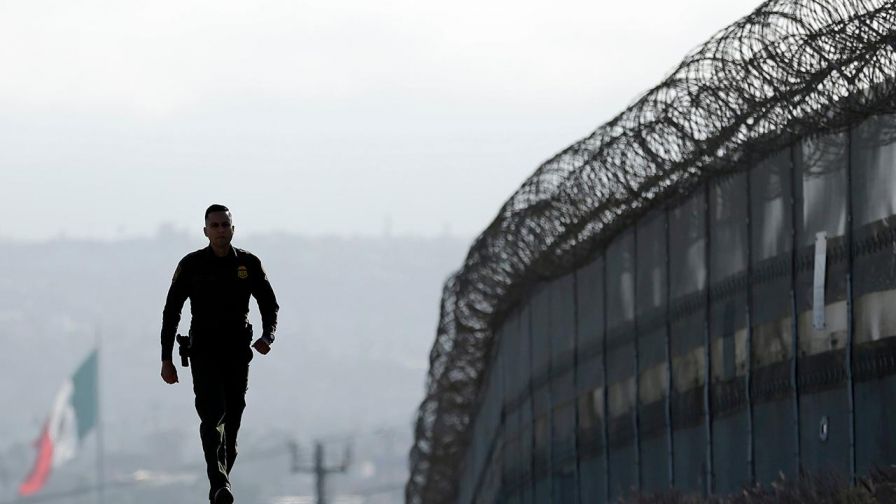 Large majorities of voters favor granting work permits or citizenship to illegal immigrants who were brought to the United States as children, according to the latest Fox News poll.

Deferred Action for Childhood Arrival recipients, or Dreamers, who do not apply for renewal in time will lose their status starting in March 2018. President Donald Trump announced Sept. 5 he was ending the Obama-era program giving Congress a six-month window to act on the program.

Trump met with Democratic leaders Sept. 13 to discuss the issue, but tweeted Sept. 14 that no deal was made. 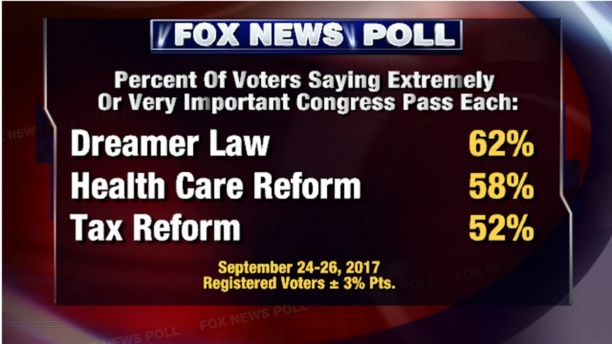 Former President Obama announced DACA in June 2012 saying, “This is not a path to citizenship. It’s not a permanent fix. This is a temporary stopgap measure that lets us focus our resources wisely while giving a degree of relief and hope to talented, driven, patriotic young people.” 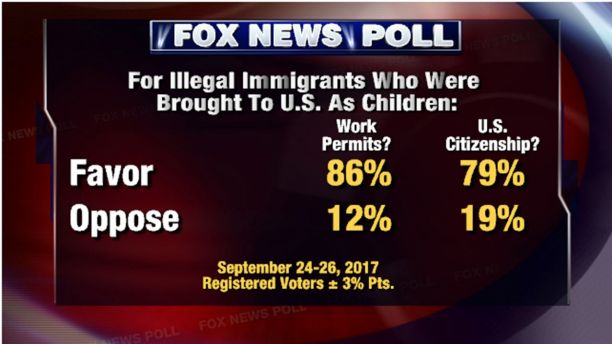 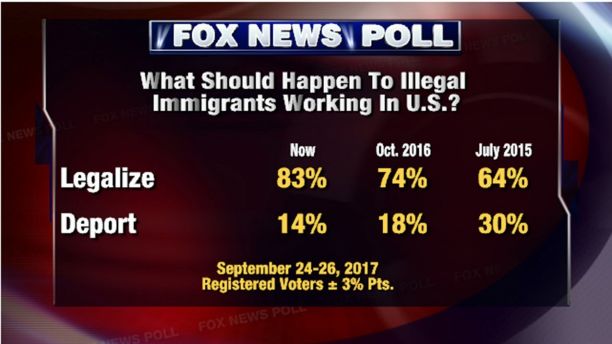 The poll finds a record-high 83 percent of voters support setting up a system for all illegal immigrants who are currently working in the country to become legal residents, up nine points since last year. Just 14 percent say “deport as many as possible,” down from a high of 30 percent in July 2015.

There is rare partisan agreement on all fronts.

Democrats (66 percent), Republicans (60 percent) and independents (59 percent) all agree it is important Congress work on Dreamer legislation. Partisans are also in sync on granting work permits and U.S. citizenship to these individuals, as majorities of Democrats, Republicans, and independents favor both actions.

One of President Trump’s main campaign promises was to strengthen immigration laws, including building a wall on the U.S.-Mexico border.

Trump voters, on the other hand, are pleased: 85 percent approve and 12 percent disapprove. Furthermore, they favor setting up a system to legalize undocumented immigrants working in the U.S. (65 percent), granting work permits (75 percent) and citizenship (63 percent) to Dreamers, and think it’s important Congress work on Dreamer legislation (60 percent).