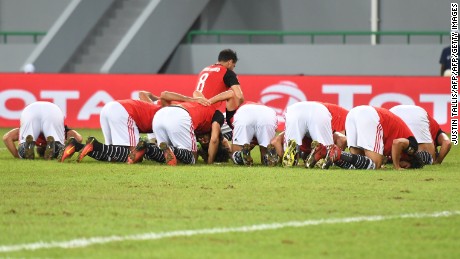 Two years ago, the Eagles exited the Africa Cup of Nations in the cruelest fashion possible.

Undefeated after its three group games, Mali’s fate was decided with the drawing of lots after finishing with exactly the same record as Guinea.

The president of Mali’s football association, Boubacar Diarra, chose the ball that placed the Eagles third in the group, while Amara Dabo, financial director of Guinea’s sports ministry, was his country’s unlikely hero.

Now, on a sodden night in Oyem, Mali’s fate was again out of its hands but the potential scenario of drawing of lots loomed again.

Should the Eagles have beaten Uganda by the same scoreline as Ghana beat Egypt, their fortune would again have been in the hands of the footballing gods.

A pre-match downpour of biblical proportions left large parts of the pitch saturated and many questioned whether the match would go ahead at all.

After a thorough inspection, referee Ali Lemghaifry deemed the surface playable but it was immediately apparent the conditions wouldn’t allow for a spectacle.

That Uganda’s stand-in keeper Robert Odongkara changing his gloves after 10 minutes was the main talking point in the first half was an indictment of the lack of quality on display.

Mali captain Yacouba Sylla had a long-range effort that whistled over the crossbar and, at the other end, Luwagga Kizito was only denied a clear goalscoring opportunity after the ball held up in a deep puddle.

The second half meandered along in much the same fashion, with neither side able to execute any semblance of a gameplan as the still-waterlogged pitch proved impossible to master.

With 20 minutes left to play, Uganda thought it had found the opener but Tony Mawejje’s deflected strike was correctly ruled out for offside.

However, with their tails up, it wasn’t long before the Cranes found the breakthrough — and with it came a piece of history.

Uganda’s teenage star Farouk Miya exchanged neat passes with Denis Iguma on the edge of the box, before rifling a half-volley past Oumar Sissoko into the top corner.

That goal was Uganda’s first at an Africa Cup of Nations since it last qualified in 1978.

But just as the Cranes started to dream of a first win in 39 years, Mali promptly extinguished those hopes.

Four minutes later, Yves Bissouma stepped up and hit a swerving free-kick from 30 yards that left Odongkara — in to replace injured domestic African Player of the Year Denis Onyango — rooted to the spot.

The players continued to plod through the mud and Kalifa Coulibaly had one final half-chance to give Mali victory, but could only volley his effort high into the empty stands.

Even if he had scored, it wouldn’t have mattered but events elsewhere did at least mean Mali could take consolation in the fact matters were this time decided on the pitch.

The final group game in this year’s Africa Cup of Nations brought together the two most decorated teams in the history of the competition.

The Black Stars of Ghana have reached the final a record nine times, winning four, while Egypt’s 44-year old goalkeeper Essam El-Hadary has lifted the trophy on more occasions (3) than most countries.

But recent history has not been kind to these giants of the African game.

Thanks to a series of near misses, the title hasn’t gone to Ghana since 1982 — before any of the current squad were born.

Meanwhile, though Egypt can boast seven trophies, the period of Pharaohs hegemony ended in 2010 following a hat trick of wins, and this year’s tournament is the first they have even qualified for since 2011’s Arab Spring.

On the evidence of Wednesday night in Port-Gentil, that could be about to change.

The pitch wasn’t kind, and the stakes weren’t particularly high given Ghana had already qualified, but both advance to the quarterfinals harboring bona fide hopes.

Mohamed Salah, known in some quarters as the Egyptian Messi, produced the match’s defining moment of quality, stepping up to take a central freekick with ten minutes on the clock.

Opting for sheer power in place of finesse, Salah utilized the Ghanaian wall to his advantage, and the ball was beyond unsighted Ghana goalkeeper Brimah Razak before he even had time to turn his head.

It was the first goal the Black Stars had conceded all tournament, and their hopes of staging a comeback were undermined when captain and record scorer Asamoah Gyan was forced off injured before the half was up.

The veteran striker had been chasing a landmark 50th goal in his 100th cap, and could only hobble off the field with a grimace.

Ghana boss Avram Grant sent on Jordan Ayew in his place, and the substitute almost leveled things late on, dropping a shoulder and showing real flair to evade the staunch Egyptian defense.

But his fierce shot was beaten away, and Ghana had no need to press the issue.

Egypt will now play Morocco in a North African derby, while the Black Stars travel to the jungle of Oyem for a clash with DR Congo.