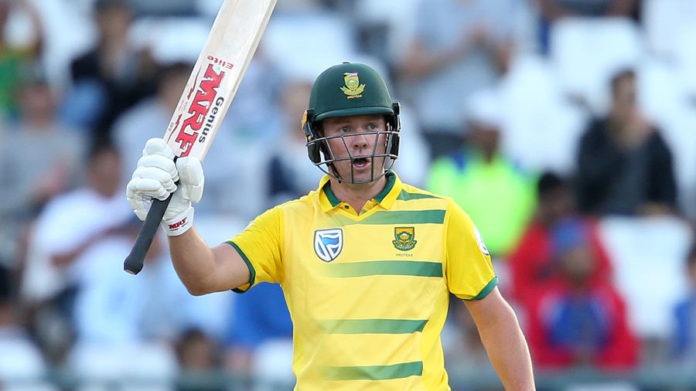 AB de Villiers may have batted as if he hadn’t been away from cricket but, after six months on the sidelines recovering from an elbow injury, his return to South Africa duty wasn’t quite as carefree as it seemed from the outside.

“He was nervous. It was almost as though he was playing his debut today,” Russell Domingo, South Africa’s coach said after de Villiers struck a 44-ball 63 in a losing cause at Newlands.

“He was very edgy and said he felt like he was playing for the first time. It’s great – it shows how much it still means to perform. That’s exciting for us, because it’s almost like a bit of a rebirth for him. He’s fresh and really desperate to do well.”

After scoring an unbeaten 134 in a List A provincial game three days before his international comeback, de Villiers appeared in decent nick. However, he needed a high-profile encounter to prove his readiness for the one-day matches which follow. He was tasked with batting at No.3 and was the mainstay of the South African innings – sharing in a 71-run second-wicket stand with Reeza Hendricks that ought to have set South Africa up for a bigger total than the 169 they eventually settled for.

“He played the situation really well today” Domingo said. “We always wanted him to have some time at the crease with the one-day series coming up, instead of coming to have a bit of a tonk at the back end.

“In my opinion he’s unbelievable in the last seven or eight overs if he can find himself set at that stage. So he played really well and we’re pleased he has some runs behind his name, he spent some time in the middle and we can focus all our energies on the one-day series.”

Domingo confirmed that de Villiers will return to No.4 in the 50-over series, with Faf du Plessis at No.3, while also revealing that the backroom staff had made peace with de Villiers opting out of Test cricket for most of 2017.

De Villiers made himself unavailable for South Africa’s next nine Tests against New Zealand, England and Bangladesh after claiming he is “just not ready” to get back into the longest format again. His intention is to be back for the series against India and Australia in the 2017-18 summer, which gives current crop a significant swathe of matches in which to establish themselves.

“The worst thing about it is that he’s not going to play for us. The best thing is it gives everyone else a bit of, not peace of mind, but there’s clarity,” Domingo said. “There’s no one looking over their shoulder wondering if they might be the one to go if AB comes back. So it gives the batters some breathing space to knuckle down and focus on their game and not be too concerned about when AB de Villiers is coming back.”

De Villiers had already missed South Africa’s last three Test series, during which time he also stepped down as Test captain. In his absence, du Plessis has taken over the leadership, JP Duminy has been installed at No.4 and Temba Bavuma has been given his opportunity in the middle-order.

De Villiers’ sights, meanwhile, are firmly focused on the 2019 World Cup. “He’s one of the best batters in the world so it’s great to have him back,” Domingo said. “It’s good to see him finding a little bit of form and looking fresh and hungry. That bodes well for the rest of our summer.”