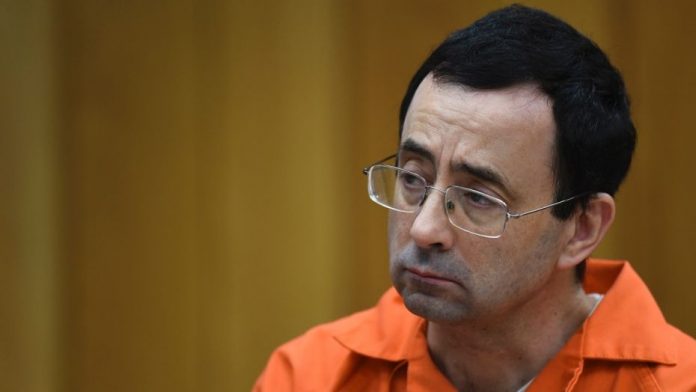 Larry Nassar has been sentenced to decades in prison on child sex charges.

WASHINGTON –  The Education Department said Thursday that it has opened an investigation into how Michigan State University handled allegations of sexual assault against Dr. Larry Nassar, a longtime employee who has been sentenced to decades in prison for molesting young athletes and possessing child pornography.

Education Secretary Betsy DeVos said investigators will look at “systemic issues” with how the school has dealt with such complaints. In a statement, she called Nassar’s actions “unimaginable.”

She added, “The bravery shown by the survivors has been remarkable.”

DeVos, who is from western Michigan, said she appreciates that the university’s acting president, John Engler, has ordered the school to cooperate fully with the investigation.

The Education Department was already reviewing separate complaints about the school’s compliance with Title IX, the law that requires schools to prevent and respond to reports of sexual violence, and compliance with requirements about providing campus crime and security information.

The Michigan Attorney General’s office also is investigating Michigan State’s handling of Nassar, who was a campus sports doctor.

Later Thursday, some of Nassar’s victims will join Michigan lawmakers in announcing new bills in the wake of the scandal. One measure would add college employees and youth sports coaches, trainers and volunteers to Michigan’s list of people who must report suspected abuse or neglect to child protective services.

Other proposals would eliminate certain time limits for victims of childhood sexual abuse to sue, lift the statute of limitations for prosecutors to file charges in certain cases of criminal sexual misconduct, and eliminate governmental immunity for people and entities that allow sexual assaults to occur.