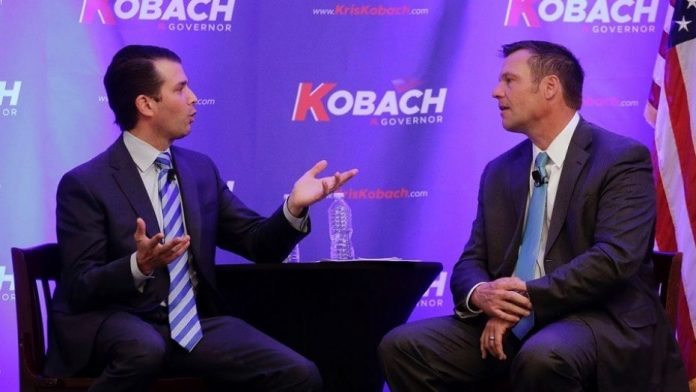 The 51-year-old Kansas secretary of state, who announced his candidacy in June, delivered a brief speech to nearly 400 attendees gathered for dinner at the DoubleTree Hotel in Overland Park.

Kobach then had a wide-ranging informal conversation with Trump Jr. onstage, touching on the media, political correctness and Trump Jr.’s father.

“I think he’s actually given conservatives the ability to actually to feel free to speak up again,” Trump Jr. said of the president, who he called a “blue-collar billionaire.”

The elder Trump carried Kansas by 20 percentage points last November, but Democrats hope to make inroads into the state’s all-GOP congressional delegation next year by attacking the president’s policies and appealing to disaffected Republican moderates.

Kobach’s solid base on the right could be enough to win the August 2018 GOP primary, particularly with a large field.

Kobach said the event raised at least $100,000 for his campaign and focused Republicans’ attention on the governor’s race early.

Ten other Republicans, including Lt. Gov. Jeff Colyer, have formed campaign committees, which will determine the successor to the term-limited Republican Gov. Sam Brownback.

Kobach, who holds degrees from Yale, Harvard and Oxford, has close ties to President Trump, and is well-known for his strong conservative positions on immigration, abortion, and gun rights.

The candidate served on Trump’s presidential transition team, where he advised the president-elect on immigration matters. Kobach co-authored Arizona’s SB 1070 anti-illegal immigration law and has played key roles in other high-profile immigration measures and court cases.

As vice chairman of Trump’s Presidential Advisory Commission on Election Integrity, Kobach has raised concerns that more than 5,000 out-of-state voters may have swung the 2016 New Hampshire races for U.S. Senate and president, echoing President Trump’s arguments about potential voter fraud.

“He’s basically the Trump candidate,” said Daniel Cossins, a 20-year-old computer programmer from the town of Spring Hill, on the south edge of the Kansas City area.

Approximately 80 protesters gathered at a park near the hotel Tuesday to accuse Kobach of racism and fear-mongering, the Kansas City Star reported.

The protesters repeatedly chanted, “This is what democracy looks like.”

One woman came prepared with a sign that read “Kansas’ Kris Kobach,” emphasizing the letter “K” in each word, the Kansas City Star reported.