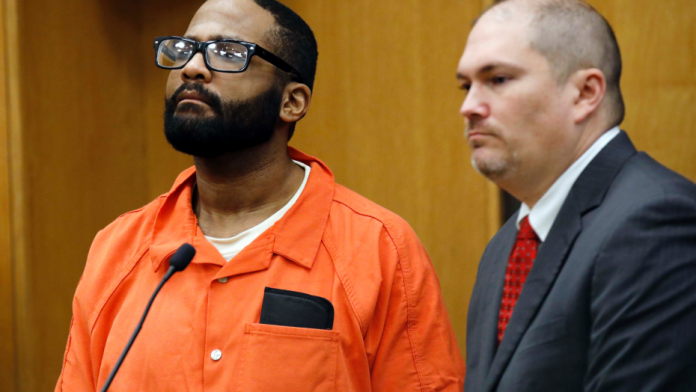 BROOKHAVEN, Miss. –  A Mississippi man accused of eight killings pleaded not guilty Monday to all charges, including four counts of capital murder for which prosecutors said they would seek the death penalty.

Willie Cory Godbolt, 35, appeared for a brief arraignment in Brookhaven, the seat of Lincoln County where the shootings happened nearly 10 months ago during what prosecutors describe as an all-night rampage. The shootings left a sheriff’s deputy, some of Godbolt’s in-laws and other acquaintances dead. Godbolt was indicted Thursday on four counts of capital murder, four counts of murder, one count of attempted murder, two counts of kidnapping and one count of armed robbery.

Investigators say that on May 27, Godbolt went to his in-laws’ home in Bogue Chitto to confront his estranged wife and demand she give up their two children. Lincoln County Sheriff’s Deputy Willam Durr responded to an emergency call from the home and told Godbolt to leave. Relatives said it seemed Godbolt was going to comply when he began shooting. He’s accused of killing Durr, mother-in-law, Barbara Mitchell, and in-laws Brenda May and Toccara May. He is also accused of firing at another deputy before fleeing the house.

He then went to two more homes in Lincoln County. In the first one, he shot teens Jordan Blackwell and Austin Edwards as they played video games, and at the second, he fatally shot Ferral and Shelia Burrage, prosecutors said. They say that at some point in between those shootings, he also kidnapped two people at gunpoint and stole a car. After his arrest on May 28, hours after the shooting, he confessed on camera to a Clarion Ledger reporter. Godbolt has been jailed without bail since his arrest.

Godbolt, noticeably thinner than when he was arrested last May and wearing jail-issued black eyeglasses, stood shackled hand and foot Monday. He gazed up at the ceiling as Assistant District Attorney Brendon Adams read the 12-count indictment.

Lincoln County Circuit Judge David Strong set the next hearing in the case for May 3.

Bates said authorities are waiting on the final results of four autopsies, as well as gun ballistic data, which all must be turned over to Godbolt’s defense before the case can move forward. Mississippi’s crime lab is backlogged because of underfunding, which slows down the prosecution of many cases. Bates declined comment on other details of the case, citing Godbolt’s right to a fair trial.

Defense attorney Jason Tate said after the hearing that he would seek to change the location of any trial because of pretrial publicity. Bates indicated prosecutors expected such a motion and would “deal with that in the court.” Durr’s memory is strong in Brookhaven, where some vehicles sport stickers bearing his badge number and the declaration, “A hero remembered lives forever.”

Tate declined to discuss whether he would seek a psychological evaluation of Godbolt, who led a life filled with violent events even before the shooting. Godbolt was convicted of misdemeanor assault or similar crimes at least six times, and charged but not convicted at least six more times.

Less than a year before the shooting, Godbolt’s wife had obtained a restraining order against him, saying he choked and punched her, and put his hand down her mouth so she couldn’t scream.

Follow Jeff Amy at: http://twitter.com/jeffamy . Read his work at https://www.apnews.com/search/Jeff_Amy .