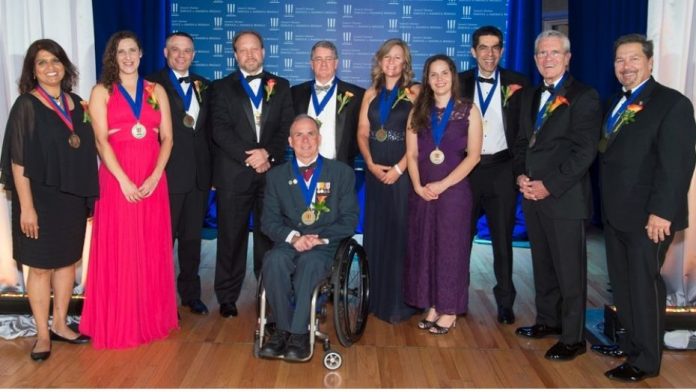 Marine Corps engineer Flora Jordan was honored this week at a Washington, black-tie gala for creating body armor that’s nearly half the weight of older models yet equally protective.

While humbled for winning the 2017 Service to America Medal, Jordan admitted that her mind was already focused on next-generation armor that will better help soldiers in combat and keep them healthier.

“This is so humbling, especially among all the accomplishments being recognized here,” Jordan, the youngest recipient of the award, formally known as the Samuel J. Heyman Service to America Medal, said Wednesday at the awards ceremony, inside the neoclassic Andrew W. Mellon Auditorium on Constitution Avenue.

The 28-year-old Jordan said she and others at Marine Corps Systems Command in Quantico, Va., are now working on integrating the award-winning vests with other solider-gear like helmets and hydration packs “in a more holistic way,” which she said will also help with back and shoulder problems.

The annual gala, in which hundreds of not-so-famous federal employees pay tribute to coworkers’ vital-yet-frequently-unheralded efforts, was not without star power and laughter this year.

Award-winning writer Michael Lewis — who’s had several books turned into movies — was among those who spoke at the ceremonies, known around the nation’s capital as the “Sammies.”

“This is way more efficient” than the Oscars, Lewis said in a nod to federal workers’ pride in no-waste efficiency.

Joshua Van Eaton, a Justice Department attorney honored with EPA investigators Phillip Brooks and Bryon Bunker for their lead work in the 2016 Volkswagen emission case, thanked Robert Muller for his efforts in negotiation the landmark, $17.4 billion settlement with the German automaker.

The case, in which the company rigged more than a half-million vehicles to evade pollution regulations, also led to billions more in civil and criminal penalties.

“It should be obvious why I’d want to stay in (former FBI Director) Mueller’s good graces,” Eaton said about Mueller, who now leads a Justice probe into whether Trump campaign officials colluded with Russia in the 2016 White House race.

“Our nation relies on dedicated public servants like those we honor here tonight,” Max Stier, president and CEO of the nonprofit, nonpartisan Partnership for Public Service, which runs the awards program, said in joint statement with Tom Bernstein, the partnership’s chairman.

This year’s lifetime achievement award went to Dr. Tedd Ellerbrock from the Centers for Disease Control and Prevention.

Ellerbrock played a vital role in building, expanding and improving the U.S.-led program that provides medicine and assistance to 11 million people worldwide living with HIV/AIDS.

Like many who won awards, Ellerbrock thanked his wife and family for their support and acknowledge how their work forced them to miss so many dance recitals and youth soccer games.

Ellerbrock said about his wife, “Without Pamela, I wouldn’t be here today. Thank you for your love and support.”

The other 2017 winners were the FDA’s Courtney Lias and Stayce Beck who paved the way for the first artificial pancreas device to receive agency approval, three years faster than expected, which has helped those living with Type 1 diabetes.

Timothy Camus, a Treasury Department inspector general, and the IRS Impersonation Scam Team won for leading a multi-agency investigation and public awareness campaign to stop a massive fraud that conned thousands of Americans into paying millions of dollars in bogus tax bills.

Rory Cooper, a Department of Veterans Affairs researcher, received a Sammie for designing wheelchairs and other assistive technology equipment that has improved the mobility and quality of life for hundreds of thousands of disabled veterans and other Americans.