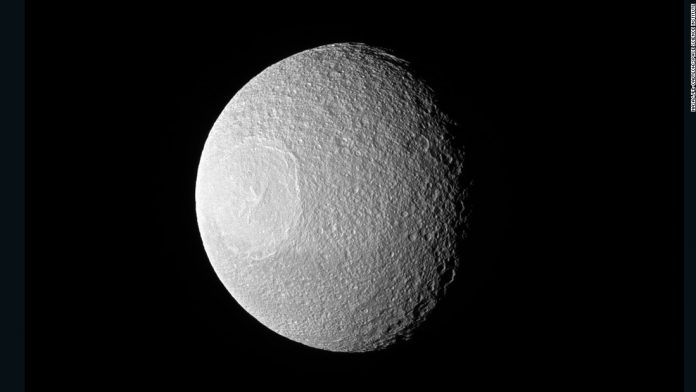 This is what Earth and its moon look like from Mars. The image is a composite of the best Earth image and the best moon image taken on November 20, 2016 by NASA’s Mars Reconnaissance Orbiter. The orbiter’s camera, the High Resolution Imaging Science Experiment (HiRISE) camera, takes images in three wavelength bands: infrared, red, and blue-green. Mars was about 127 million miles from Earth when the images were taken.

PGC 1000714 was initially thought to be a common elliptical galaxy, but a closer analysis revealed the incredibly rare discovery of a Hoag-type galaxy. It has a round core encircled by two detached rings.

NASA’s Cassini spacecraft took these images of the planet’s mysterious hexagon-shaped jetstream in early December 2016. The hexagon was discovered in images taken by the Voyager spacecraft in the early 1980s. It’s estimated to have a diameter wider than two Earths. Scientists are still trying to figure out what causes it. Cassini was launched in 1997 and is beginning the end of its mission. The probe will dive into Saturn’s atmosphere on September 15, 2017, sending back data until its signal is lost.

A dead star gives off a greenish glow in this Hubble Space Telescope image of the Crab Nebula, located about 6,500 light years from Earth in the constellation Taurus. NASA released the image for Halloween 2016 and played up the theme in its press release. The agency said the “ghoulish-looking object still has a pulse.” At the center of the Crab Nebula is the crushed core, or “heart” of an exploded star. The heart is spinning 30 times per second and producing a magnetic field that generates 1 trillion volts, NASA said.

Peering through the thick dust clouds of the galactic bulge an international team of astronomers has revealed the unusual mix of stars in the stellar cluster known as Terzan 5. The new results indicate that Terzan 5 is one of the bulge’s primordial building blocks, most likely the relic of the very early days of the Milky Way.

An artist’s conception of Planet Nine, which would be the farthest planet within our solar system. The similar cluster orbits of extreme objects on the edge of our solar system suggest a massive planet is located there.

An illustration of the orbits of the new and previously known extremely distant Solar System objects. The clustering of most of their orbits indicates that they are likely be influenced by something massive and very distant, the proposed Planet X.

Say hello to dark galaxy Dragonfly 44. Like our Milky Way, it has a halo of spherical clusters of stars around its core.

A classical nova occurs when a white dwarf star gains matter from its secondary star (a red dwarf) over a period of time, causing a thermonuclear reaction on the surface that eventually erupts in a single visible outburst. This creates a 10,000-fold increase in brightness, depicted here in an artist’s rendering.

Gravitational lensing and space warping are visible in this image of near and distant galaxies captured by Hubble.

At the center of our galaxy, the Milky Way, researchers discovered an X-shaped structure within a tightly packed group of stars.

Meet UGC 1382: What astronomers thought was a normal elliptical galaxy (left) was actually revealed to be a massive disc galaxy made up of different parts when viewed with ultraviolet and deep optical data (center and right). In a complete reversal of normal galaxy structure, the center is younger than its outer spiral disk.

NASA’s Hubble Space Telescope captured this image of the Crab Nebula and its “beating heart,” which is a neutron star at the right of the two bright stars in the center of this image. The neutron star pulses 30 times a second. The rainbow colors are visible due to the movement of materials in the nebula occurring during the time-lapse of the image.

The Hubble Space Telescope captured an image of a hidden galaxy that is fainter than Andromeda or the Milky Way. This low surface brightness galaxy, called UGC 477, is over 110 million light-years away in the constellation of Pisces.

On April 19, NASA released new images of bright craters on Ceres. This photo shows the Haulani Crater, which has evidence of landslides from its rim. Scientists believe some craters on the dwarf planet are bright because they are relatively new.

This illustration shows the millions of dust grains NASA’s Cassini spacecraft has sampled near Saturn. A few dozen of them appear to have come from beyond our solar system.

This image from the VLT Survey Telescope at ESO’s Paranal Observatory in Chile shows a stunning concentration of galaxies known as the Fornax Cluster, which can be found in the Southern Hemisphere. At the center of this cluster, in the middle of the three bright blobs on the left side of the image, lies a cD galaxy — a galactic cannibal that has grown in size by consuming smaller galaxies.

This image shows the central region of the Tarantula Nebula in the Large Magellanic Cloud. The young and dense star cluster R136, which contains hundreds of massive stars, is visible in the lower right of the image taken by the Hubble Space Telescope.

In March 2016, astronomers published a paper on powerful red flashes coming from binary system V404 Cygni in 2015. This illustration shows a black hole, similar to the one in V404 Cygni, devouring material from an orbiting star.

This image shows the elliptical galaxy NGC 4889, deeply embedded within the Coma galaxy cluster. There is a gigantic supermassive black hole at the center of the galaxy.

Caltech researchers have found evidence of a giant planet tracing a bizarre, highly elongated orbit in the outer solar system. The object, nicknamed Planet Nine, has a mass about 10 times that of Earth and orbits about 20 times farther from the sun on average than does Neptune.

An artist’s impression of what a black hole might look like. In February, researchers in China said they had spotted a super-massive black hole 12 billion times the size of the sun.

Are there are oceans on any of Jupiter’s moons? The Juice probe shown in this artist’s impression aims to find out. Picture courtesy of ESA/AOES

Astronomers have discovered powerful auroras on a brown dwarf that is 20 light-years away. This is an artist’s concept of the phenomenon.

Venus, bottom, and Jupiter shine brightly above Matthews, North Carolina, on Monday, June 29. The apparent close encounter, called a conjunction, has been giving a dazzling display in the summer sky. Although the two planets appear to be close together, in reality they are millions of miles apart.

Jupiter’s icy moon Europa may be the best place in the solar system to look for extraterrestrial life, according to NASA. The moon is about the size of Earth’s moon, and there is evidence it has an ocean beneath its frozen crust that may hold twice as much water as Earth. NASA’s 2016 budget includes a request for $30 million to plan a mission to investigate Europa. The image above was taken by the Galileo spacecraft on November 25, 1999. It’s a 12-frame mosaic and is considered the the best image yet of the side of Europa that faces Jupiter.

This nebula, or cloud of gas and dust, is called RCW 34 or Gum 19. The brightest areas you can see are where the gas is being heated by young stars. Eventually the gas burst outward like champagne after a bottle is uncorked. Scientists call this champagne flow. This new image of the nebula was captured by the European Space Organization’s Very Large Telescope in Chile. RCW 34 is in the constellation Vela in the southern sky. The name means “sails of a ship” in Latin.

The Hubble Space Telescope captured images of Jupiter’s three great moons — Io, Callisto, and Europa — passing by at once.

Using powerful optics, astronomers have found a planet-like body, J1407b, with rings 200 times the size of Saturn’s. This is an artist’s depiction of the rings of planet J1407b, which are eclipsing a star.

A patch of stars appears to be missing in this image from the La Silla Observatory in Chile. But the stars are actually still there behind a cloud of gas and dust called Lynds Dark Nebula 483. The cloud is about 700 light years from Earth in the constellation Serpens (The Serpent).

This is the largest Hubble Space Telescope image ever assembled. It’s a portion of the galaxy next door, Andromeda (M31).

NASA has captured a stunning new image of the so-called “Pillars of Creation,” one of the space agency’s most iconic discoveries. The giant columns of cold gas, in a small region of the Eagle Nebula, were popularized by a similar image taken by the Hubble Space Telescope in 1995.

Astronomers using the Hubble Space pieced together this picture that shows a small section of space in the southern-hemisphere constellation Fornax. Within this deep-space image are 10,000 galaxies, going back in time as far as a few hundred million years after the Big Bang.

Planetary nebula Abell 33 appears ring-like in this image, taken using the European Southern Observatory’s Very Large Telescope. The blue bubble was created when an aging star shed its outer layers and a star in the foreground happened to align with it to create a “diamond engagement ring” effect.

NASA’s NuSTAR telescope array generated the first map of radioactivity in the remnants of an exploding star, or supernova. Blue in this image of Cassiopeia A represents radioactive material.

A supernova was spotted on January 21 in Messier 82, one of the nearest big galaxies. This wide view image was taken on January 22.

The M82 supernova, seen here, has been designated SN2014J because it is the 10th supernova detected in 2014. At 11.4 million light years from Earth, it is the closest Type Ia supernova recorded since systematic studies with telescopes began in the 1930s.

Hubble scientists say this is the best-ever view of the Tarantula Nebula, which is located in one of our closest galactic neighbors, the Large Magellanic Cloud.

This Hubble image looks a floating marble or a maybe a giant, disembodied eye. But it’s actually a nebula with a giant star at its center. Scientists think the star used to be 20 times more massive than our sun, but it’s dying and is destined to go supernova.