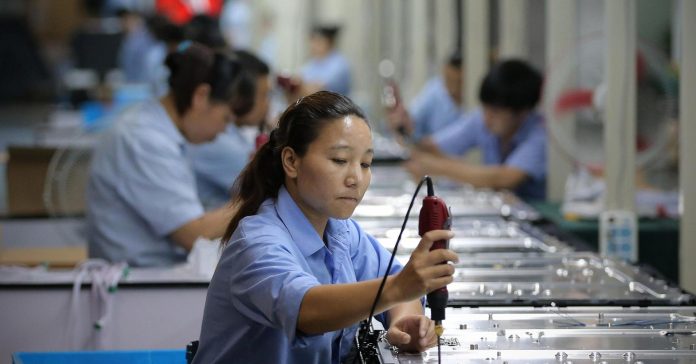 The latest survey showed input prices continued to rise at a solid clip, with the reading at 68.4 compared with 65.3 in August, benefiting upstream producers such as miners, smelters and oil refiners.

Indexes for raw materials prices in the paper, wood processing and furniture, and chemical products manufacturing industries were all above 75.0, said Zhao, indicating large price increases.

Output prices also rose but at a slower pace, pointing to lower profit margins for companies further along the supply chain who are unable to pass on all of the price increases to their customers.

A separate PMI on the steel industry fell to 53.7 in September from 57.2 in August but remained in solid expansion territory, as the industry faces production restrictions aimed at reducing choking air pollution over the winter.

Analysts at China Merchants Securities said stricter production limits related to efforts to improve air quality and supply-side adjustments from capacity cuts had helped to improve the supply-demand balance, with new orders rising faster than production in September for the first time since 2012.

For the manufacturing sector overall, inventories of raw materials and finished goods continued to decline in September, providing little indication that factories were stocking up in preparation for winter production cuts.

Big firms saw the strongest improvement in September, with a large firms sub-index rising to 53.8, while one for small firms improved slightly but was still in contraction territory at 49.4.

China’s cabinet on Wednesday said that China will take a number of measures, including tax exemptions and targeted reserve requirement ratio cuts, to encourage banks to support small businesses.

The impressive performance for China’s manufacturers comes despite a government push to shutter outdated industrial capacity and clean up polluting industries, though some analysts say official claims of massive capacity cuts are misleading as overall production is still rising.

Chinese authorities are also in the midst of a campaign to reduce the risks from a rapid build-up in debt produced by years of credit-fuelled stimulus, and the continued strength of the industrial sector could give policymakers confidence to stick to the push for deleveraging.