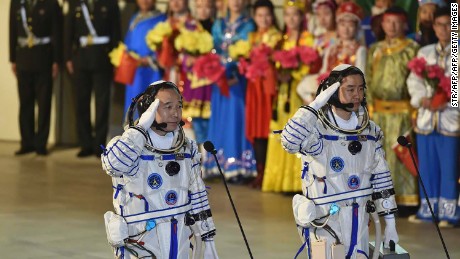 China’s ambitious and fast-growing space program is targeting a landing on the dark side of the moon by 2018, and reaching Mars before the end of the decade.

The country’s space agency held a press conference on Tuesday to mark the release of a policy paper, and outlined the government’s goals for exploring deep space.

Wu Yanhua, deputy chief of the National Space Administration, said Beijing aims to launch its first Mars probe around 2020 to carry out orbiting and roving exploration, followed by a second mission that would include collection of surface samples from the red planet.

He said other plans include sending probes to Jupiter and its moons.

“Our overall goal is that, by around 2030, China will be among the major space powers of the world,” he said.

China was late to the space race — it didn’t send its first satellite into space until 1970, just after the United States put the first man on the moon.

But in the decades since, China has pumped billions of dollars and other resources into research and training.

Since 2003, China has staged a spacewalk, landed a rover on the moon and launched a space lab that it hopes paves the way for a 20-ton space station.

It has also sent five crews into space in the same span of time, making it only the third country in the world — after Russia and the United States — with such success.

Wu told reporters China is still studying the possibility of sending a man to the moon, but focusing on robotic lunar missions for now, including making the first soft landing on the far side of the moon around 2018.

He also emphasized China’s increasing cooperation with other international space agencies — with NASA being the exception.

Since 2011, the U.S. Congress has prohibited NASA from working with China because of national security concerns.

During his campaign, U.S. President-elect Donald Trump professed his love for NASA and that “space is terrific.” His senior advisors have advocated a “new vision” for the U.S. space program.

“NASA should be focused primarily on deep space activities rather than Earth-centric work that is better handled by other agencies,” wrote Robert Walker and Peter Navarro in October.

“While the American government’s space program has suffered from under-investment, both China and Russia continue to move briskly forward with military-focused initiatives,” they added. “Each continues to develop weapons explicitly designed… to ‘deny, degrade, deceive, disrupt, or destroy’ America’s eyes and ears in space.”

Chinese officials on Tuesday reiterated the country’s “peaceful motives” behind its space exploration and utilization, but many have pointed to Walker and Navarro’s article as a sign that potential U.S.-China collaboration in space would be unlikely — and probably even more so after Trump’s recent tweets challenging Beijing’s polices on issues ranging from Taiwan to trade and South China Sea.