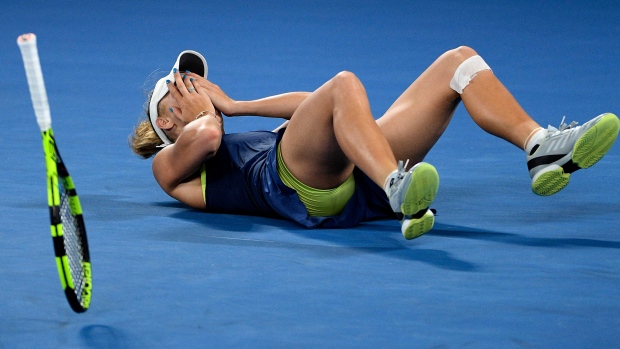 One of the first things she did as a champion was apologize to top-seeded Simona Halep following her 7-6 (2), 3-6, 6-4 win in the Australian Open final on Saturday night.

Wozniacki, 7½ years after appearing in her first Grand Slam final at the 2009 U.S. Open, can remove the “but never won a major” footnote that has long been associated with her career.

“I’m sorry I’m just taking a second to hug Daphne,” she said of the trophy for the women’s singles champion. “I dreamt of this moment so many years, to be here now it’s a dream come true.”

She’ll also regain the top ranking for the first time in six years, a record between stints at No. 1 in the Open era, in another benefit of beating the top-seeded Halep.

It was the first time in the Open era that players ranked No. 1 and 2 were meeting in a major final without either having won a Grand Slam title.

So the pressure was on.

“I know that today is a tough day,” Wozniacki said to Halep. “I’m sorry I had to win today but I’m sure we’ll have many matches in the future. Incredible match, incredible fight. And again, I’m sorry.”

Halep, who was playing with an injured left ankle and had rallied from a break down in the third set to lead 4-3 when Wozniacki took a medical time out to have her left knee taped, just ran out of steam.

“It’s not easy to talk now, she played amazing,” Halep said. “It’s been a great tournament for me. I started not very well with the ankle injury. I just wanted to give my best every match, which I did. Of course I’m sad I couldn’t win today but Caroline was better than me.

“Sad that I couldn’t make it the third time, maybe the fourth time will be with luck.”