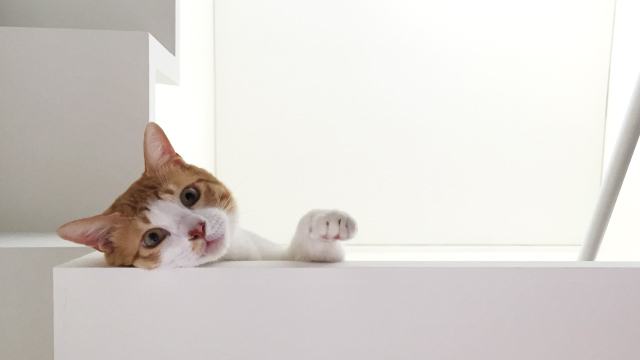 Far from unusual, this is just one of many so-called “cat flats” springing up across Asia.

In such properties, cat flaps are passé. Tiny arched doorways connecting rooms, shelves that serve as climbing frames and scratching surfaces doubling as decorative features are the norm.

“The cat business is booming. I don’t remember it being like this three years ago,” says Szuti Tsai, founder of Taipei-based ST Studio Design and the interior designer behind Mei Mei’s flat.
Since 2011 pet cat popularity has increased by 91% in Taiwan, with owners shelling out $598.4 million on pet-related products and services a year, according to the Council of Agriculture.

“People who love their cats really do go a bit crazy for them,” admits Tsai.

A Taipei loft for cats

Clean and contemporary, the Taipei apartment — dubbed Loft H — came about in an unconventional manner.

Tsai, who had just adopted a cat, met her client in an online pet forum, where owners post questions and share advice. One user left an unusual message: he was looking for someone to design a minimalist apartment tailored to the needs of his two cats.

“(The client) said his cats hated it when he closed the doors. They went crazy,” says Tsai. “Cats actually need a lot more attention than people think. They want to know what you’re doing at every moment.”

In order to solve that issue, Tsai knocked down the internal walls, and turned the apartment into an open-plan space, bar the bathroom. Furthermore, she opened up the windows to let in more natural light, offering the cats several spots for sunbathing.

On various walls Tsai built an elaborate system of ledges to serve as a cat playground, the layout of which can be adjusted to keep the pets interested.

Although space was limited, the owners of this property were clear in their initial design brief to OBBA architects: their home had to be cat orientated.

Taking their brief seriously, the designers installed dedicated “cat lounges” — sun-drenched areas where the felines can kick back and play — as well as a white staircase designed specifically for the cats.

This ingenious feature winds through the house, terminating at a high ledge where the cats can relax above the humans.

Meanwhile, in Hong Kong building a home that truly accommodates both man and beast was an even greater challenge, given the city state’s notoriously small apartments.

But the 309 square foot (29 sqm) Small Home Smart Home, designed by LAAB Architects, is a prime example of how this can be achieved.

Not only does this micro property feature a home cinema, bath tub and gym, it also includes a carpeted catwalk that traces the ceiling, a cat ladder, a hidden litter box beneath the bathroom sink, discreet food trays that slide out of kitchen cabinets and even a private cat den.

“The apartment was not only designed for (owners) Michelle and Andy Knight but also for their three cats, Banoffee, Dumpling and Tuxedo,” Otto Ng, co-founder of LAAB Architects, tells CNN.

Home owner Andy Knight says the design team chose materials for the cat features that would keep the small space dry and free of unsavory smells.

“For example, the cat litter box has been equipped with its own ventilation system that pulls smells out of the building,” he tells CNN.

“The cat walks give them more places to go,” says Knight. “The cats spend a lot of time sleeping up there and looking down at us and friends as we use the apartment.”

So was the extra hassle, and cost, of making the apartment cat friendly worth it?

“A home is about everyone that lives in that space together, not just the people.”