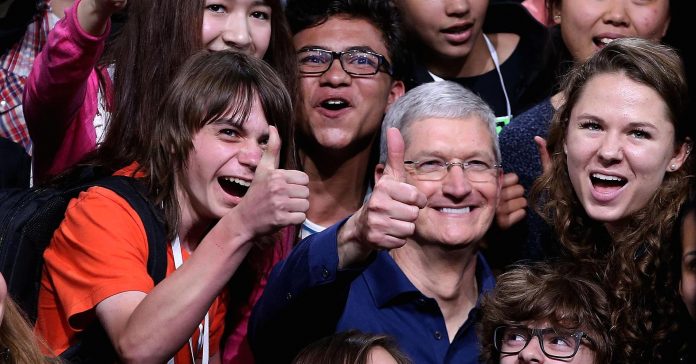 Neil Cybart, analyst at Above Avalon, a daily Apple newsletter, believes the average selling price of an iPhone could jump by more than $100 to a new record, well above $800.

“Apple saw stellar iPhone X sales” in the quarter, Mr Cybart said, largely because Apple was able to overcome concerns that it was unable to manufacture enough devices to meet demand. “Apple’s supply chain was able to ramp iPhone X production much faster than anyone expected,” he said.

However, a blockbuster performance in the December quarter could mean iPhone sales slow down faster this year than Wall Street is expecting.

If Apple provides revenue guidance for the March quarter that comes in short of Wall Street’s current expectations of $66bn-$69bn, it faces the seemingly paradoxical prospect of its shares falling at the same time as it reports record profits.

The outcome could depend on how Apple fares in China. Morgan Stanley predicts a “strong” double-digit percentage increase in iPhone unit sales in the world’s largest mobile market for the December quarter, compared with a slight decline in the US. Nonetheless, Canalys estimates that overall smartphone sales in China fell 4 percent last year, the market’s first ever annual decline. “The market has slowed faster than expected,” said Canalys analyst Mo Jia.

As well as predicting strong iPhone sales, investors are hoping that US tax reforms will lead to an increase in Apple’s capital return programme. However, any update on Apple’s dividend and share buyback scheme is unlikely before April.

Apple has said it expects to pay a record tax bill of $38bn on its more than $250bn of overseas profits.