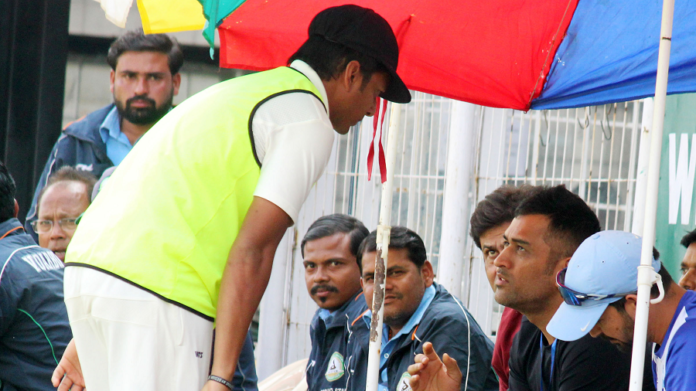 While the rest of the cricket world received a sudden jolt with MS Dhoni’s decision to relinquish the captaincy for India’s limited overs teams, the man himself carried on as if it was no big deal


MS Dhoni’s last act before the BCCI issued an advisory to inform that he had stepped down as India’s limited-overs captain was a 30-minute long meeting with his Jharkhand team-mates on their Ranji Trophy campaign.

He chatted with them about the highs and lows, on a campaign that, in many ways, was pathbreaking. This was Jharkhand’s first-ever semi-final since their entry in 2004. When the world received a typically short message that didn’t state why he had done so, Dhoni was fiddling away on his Playstation console, challenging his mates to a game of FIFA even as four security guards stood outside the room preventing the hotel staff and bell boys from seeking autographs or the in-demand selfie.

After everyone had dispersed though, he rallied his team together for a small dinner. He walked out relaxed, as if nothing in the world had changed for him even if everyone else, particularly in the cricket fraternity, had an evening of hard work ahead, as was the case when he dropped the bombshell of his Test retirement minutes after a post-match press conference in Melbourne where there was no inkling of what was to follow.

In Dhoni’s world though, the news of his retirement may have been just another little thing. Over the last four days in Nagpur, there was little to suggest his hunger had diminished, or his appetite for batting and those helicopter shots had reduced. Much after Jharkhand were bundled out in the final session, Dhoni, with four bats of varying sizes and thickness, strode for a range-hitting session on the centre wicket. And connect he did, hitting balls to all corners of the old VCA ground in Civil Lines. Oh, and amidst all this, there was a lengthy chat with MSK Prasad, the chairman of selectors, even as local photographers clicked away, ever so certain that the discussion was on India’s team composition for the England series.

His everyday routine included thirty-minute batting sessions during the lunch breaks, followed by an hour at the gym before he exercised his arms by simply lifting it and staying put – waving to 500-odd spectators who religiously turned up every day just to have their hero acknowledge them. A mere glance towards their direction was enough to elicit whistles and the faimilar ‘Dhoni! Dhoni!’ chants. He may have not been in the limelight for a couple of months now, since India were engaged only in Tests over the last couple of months, yet that didn’t diminish his star power.

But Dhoni’s stay in Nagpur wasn’t just about himself, but about his state side, with whom he has trained at different times in the last year, most notably during the domestic one-day championship last year. His last Ranji Trophy appearance may have been in 2004, but the camaraderie he shared with his young group was visible. His team-mates weren’t ignored amidst the craze.

Wicketkeeping tips were given to Ishan Kishan. Considerable time was spent in demonstrating, or so it seemed, the importance of having soft hands. Batting tips were offered to men that were to follow in the batting order, catching practice and light throw-downs before play completing his everyday routine to begin. He looked every inch a man who didn’t have the weight of expectation.

Dhoni has often underlined the importance of building a team that can succeed without him, of leaving when “the time is right” even though no one could be really sure if he will last till the 2019 World Cup. Mingling with a young group, dining with them and spending time may be intangible contribution to his state side, the moments treasured by all members of the squad. Rookies and senior players alike, talking about the value of having him in the dressing room, one can sense, aren’t empty words.

In Nagpur, it definitely didn’t feel like a young team overawed by the presence of an icon, a limited-overs great. They just did fine, happy and cheerful like a young family welcoming their elder brother.

Shashank Kishore is a senior sub-editor at ESPNcricinfo