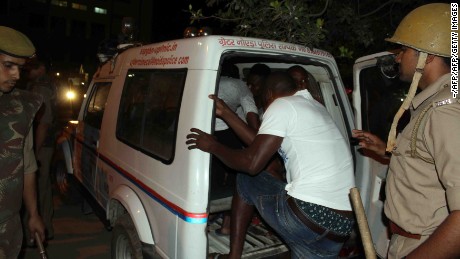 Multiple attacks on Kenyan and Nigerian students have been reported this week in Greater Noida, 18 miles southeast of the capital New Delhi.

Nine Nigerians were attacked, including five who were wounded and two who were hospitalized with undisclosed injuries, said Abike Dabiri, Nigeria’s special assistant on foreign affairs and diaspora.

Additionally, a Kenyan woman in her twenties was admitted to hospital Wednesday after she was attacked while getting out of a cab, according to Dharmendra Singh, a senior police superintendent in Noida.

The woman was released from hospital the same day.

Police said the violence began over the weekend, following the death of a teenager in an alleged drug overdose.

His family filed a police report against five local Nigerian men, who have since been detained on suspicion of drug peddling, abduction and murder, police said.

A postmortem, however, did not confirm the theory of a drug overdose and the men were later released.

On Monday, a counterprotest by Indians turned violent. Police officer Amir Dikshit said about 500 to 600 people attacked two students in a shopping mall in Noida.

A shocking video posted online by AASI showed dozens of men hitting, kicking and hurling metal objects at a man lying apparently unconscious on the floor.

An hour earlier, in a separate incident, another group attacked another Nigerian man, 27-year-old Auwal Aliyu.

Aliyu said he had left home to get food when he saw a “gang of men” approaching him and fled inside a shop.

“I went inside looking for help (but) they chased me out,” he said. He was badly beaten and hospitalized.

Dabiri told CNN the attacks were a case of “mob action.”

“The Nigerians that were attacked were completely innocent, they just happened to be black … I have spoken to the leaders of the Nigerian community in India and a lot of them are indoors, they are scared,” she said.

“They were worried about a mob that was gathering overnight.”

She demanded the “prompt prosecution” of those involved in the attack.

Police said five men have been arrested in connection with the shopping mall attack, while a Ministry of External Affairs spokesman said steps were being taken “to keep the situation under control.”

“(Monday’s) incident in Greater Noida, in which several people of African origin were injured, is deplorable,” spokesman Gopal Baglay said.

“Law enforcement authorities of the district have made arrests and are investigating into this matter.”

African students in the area however remain fearful.

Aliyu, a masters student studying biotechnology, said he had not left his room since he was discharged from hospital Tuesday. Although he has no food in the house except for some biscuits, he said he doesn’t want to leave.

“I cannot take the risk, I have to be very careful,” he said.

Ezeugo’s organization is attempting to deliver food and other supplies to African students unable to leave their homes.

“With regards to food, and other daily home needs that might prompt anyone to go out, we are working towards creating a system to ensure that supplies gets across to you all,” he said on Facebook.

“Please maintain and keep the peace, and discourage any form of retaliation towards Indians.”

The AASI has also formed a committee to help students who have been attacked deal with the authorities.

While Indian media have expressed horror at the attacks, some Africans say the topic of racism is being avoided or overlooked, at the cost of their safety.

“They don’t want to call it a racist attack against Africans but that’s what it is,” said Ezeugo.

“Until the government has fully ensured our security, people should desist from coming here.”

African students say they routinely face discrimination in India and sometimes even violence. Last year, a group of men beat a Congolese man to death in Delhi, according to The Hindu newspaper.
A 2014 investigation by the Hindustan Times found that Africans across the country reported incidents of everyday racism, “from being overcharged by auto and taxi drivers to being the butt of racist jokes, the subject of racist comments based on their skin color, and being branded as ‘drug-traffickers’.”

That racism was at play in the attacks Monday. People spread rumors that the five Nigerian men were cannibals, said Singh, the police superintendent.

Speaking to her audience Tuesday, NDTV anchor Sonia Singh asked why the racism against Africans isn’t considered “a national shame.”

“Just look at how India reacts whenever there is any kind of racist attack against Indians in other parts of the world, but do we ever stop and think how we treat those of other nationalities who live in India,” she said.