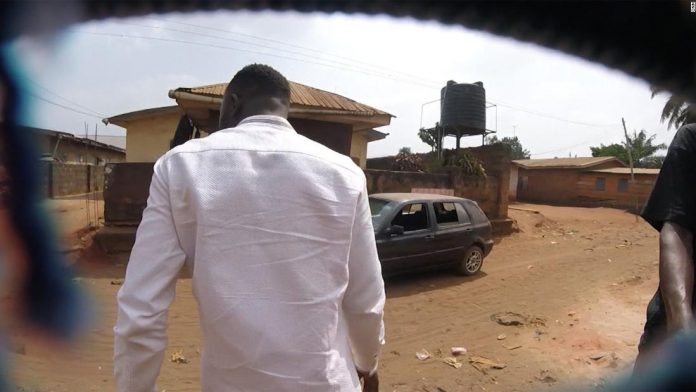 Fluorescent lights flicker intermittently inside the hotel, which doubles as a brothel and serves as the headquarters of tonight’s operation.

We are posing as would-be migrants attempting to reach Italy with the help of our “pusherman” — one of an army of brokers who work alongside smugglers on the Nigerian end of the migrant route from Africa to Europe.

When they arrive, they’re told by smugglers they will need to pay thousands of dollars more to continue their journey across the Mediterranean.

When the migrants fail to pay, they are held in grim living conditions, deprived of food, abused by their captors, and sold as laborers in slave auctions.

Footage obtained of a slave auction in Libya — in which young men were sold by smugglers for as little as $400 each — caused international outrage.

Three months later we wanted to see whether that outrage had translated into action. CNN producer Leposo and I went undercover as two wealthy women paying for the “VIP” travel package from Nigeria to Europe, which includes a smuggler who will meet us in the northern city of Kano and escort us across the border into Libya.

We gave scant detail about our situation, saying only that we hoped to reach Italy and then travel from there to London. The smugglers were mostly interested in our money, and asked few questions.

In reality, our plan was to secure a deal, set off from Auchi in the north of Edo State, and then quit the journey as soon as we were safely out of the sight of smugglers.

Setting up the deal was incredibly easy. Hassan, another CNN producer, worked undercover to negotiate a deal with the pusherman in Ekpoma, also in Edo State.

The money was due on our arrival in Libya. Hassan was the guarantor of our journey and would be held accountable if we became frightened and backed out of the deal.

He was told by the pusherman that the price to smuggle women is higher than for, say, small boys, because women’s journeys are “even more difficult — they are molested there (in Libya).”

As part of our “VIP” travel package, we were offered condoms for the journey. The pusherman later expressed dismay that I hadn’t packed any myself.

“We give you contraception,” he told me. “You need men in Libya to be kind to you. They will have things you want. Do you understand?”

When I said “yes,” he laughed.

“Of course, you understand,” he continued. “You don’t get something for nothing in this life. You’re lucky, the men sometimes wait six months before they’re put on the boat to Europe.”

“Women though — if they’re like you — sometimes you can be put on a boat the very next day.”

He has a warning for me: “Listen, don’t struggle if you’re raped.”

Sexual abuse on the migrant route

Women and children routinely face sexual violence, abuse and detention along the Central Mediterranean migration route from North Africa to Italy, according to a 2017 UNICEF report.

“Nearly half the women and children interviewed had experienced sexual abuse during migration — often multiple times and in multiple locations,” said the report, which compiled testimony from 122 migrants.

The attorney general of Edo State, Yinka Omorogbe, is leading a taskforce that was set up last August to combat modern slavery and human trafficking.

“We are actively involved in investigation and have commenced several prosecutions,” she told CNN in a written statement. “Like I have said, we have just started. We are awaiting a state anti-trafficking law which will further strengthen us. We have a destination and we’ll get there.”

“Trafficking in Edo is neither solely about economic issues nor underdevelopment, but has deep cultural roots that must be exposed, examined and pulled out.”

Within one day of Hassan securing a deal, we met the pusherman at the hotel to embark on the first stage of the journey.

Floral curtains adorned the room’s barred windows, and not much was explained to us by the traffickers. Very quickly we were taken to the local bus depot in Auchi, where the pusherman flagged down a bus traveling north to Kano.

Public transport offers good cover for smugglers in Nigeria. It’s far more difficult for authorities to keep tabs on buses running through their usual routes, laden with people and legitimate goods, then it is to chase down vehicles specially used by the traffickers.

We squeezed down the aisles of the busy overnight bus before the doors were locked shut from the outside as a safety precaution against potential hijackers.

Once out of sight of the smugglers, we disembarked on the outskirts of the city, where Hassan was waiting for us. We were relieved to see him.

Had we kept going — as our traffickers intended — we would have arrived in Kano 14 hours later. From there, the plan was that a member of the smuggling network would have put us on a second bus destined for Agadez in Niger.

From Agadez we would have traveled to Sabha in southern Libya — a place where survivors of the slave trade have previously told CNN they were marched off the bus at gunpoint, later to be sold at auction.

Luckily for us, none of that is our future. For others, it is a horror they cannot escape.

And as our rapid quest from contacting a pusherman, to negotiating a deal, and setting off on a bus towards Libya showed, it is a still a journey all too easy to make.