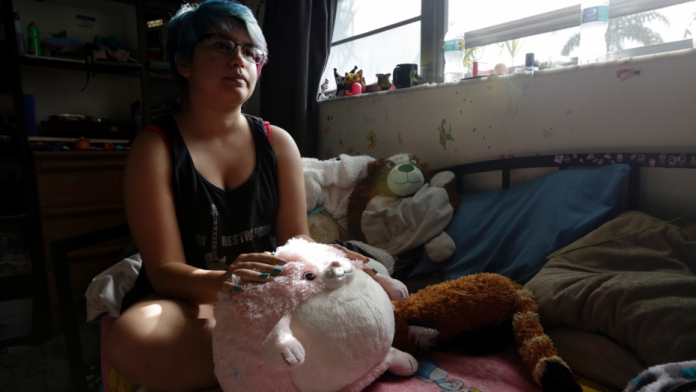 HOMESTEAD, Fla. –  It’s been six years since Theo Ramos first cut himself in the school bathroom, six years since his parents and friends and teachers found out he wanted to be a boy instead of a girl, six years in transition.

And his mother, 55-year-old Lori Ramos, has been at his side.

“We’ve had moments of laughter, and we’ve had moments of joy,” she said. “When he’s feeling good with himself and he’s communicative, when he has no care in the world, and he’s spontaneously saying, ‘Hey, Mom, let’s go for a walk’ and fills me in on his day, that’s joy. For a kid who doesn’t communicate, who is very introspective, that’s joy to me.”

Theo’s now 16. He prefers “he/they” pronouns and sometimes calls himself “the boy prince” on social media. He embraces his gender fluidity, meaning that whether he identifies as male or female can change, depending on day or mood.

Sitting in his bedroom, Theo snuggled a stuffed animal named Strawberry, and ran a manicured hand through blue and pink hair while singing to Disney’s “Moana” soundtrack. He said he surprised himself by liking the movie because he doesn’t normally enjoy such girly things — but something in the theme of self-discovery struck a chord.

“But the voice inside sings a different song. What is wrong with me?”

Theo stopped short of drawing parallels with his life and the movie’s popular song, “How Far I’ll Go.” Yet identity and self-discovery play crucial roles in Theo’s depression, anxiety and troubles.

“I present myself differently on different days, depending on what it is I’m doing or who I’m seeing, but my emotions about my gender identity pretty much stay the same.”

Until recently, transgender people lived largely in the shadows. Depression was common. So was suicide.

Then, in 2015, a former Olympic superstar came out as a trans woman, Caitlin Jenner. And then came public-policy debates over bathrooms for trans people. This year, President Donald Trump issued a ban on transgender troops in the military; a judge barred his administration from proceeding.

Visibility and discussion of transgender issues hit a high — and some argue that trans people are more accepted than ever, while acknowledging that society has a long way to go.

Still, Theo said, all the discussion in the world doesn’t make life any easier as a gender-fluid or transitioning kid.

The depression, the anxiety, the uncertainty are all there, every day. There’s no getting around it — there’s only managing it as best as possible.

Sometimes, Theo can’t handle it all.

He went months without cutting. But right before Thanksgiving 2016, something triggered him – not his gender dysphoria, he said, but a long-ago traumatic event. He relapsed.

The cuts on his arm were so deep that he ended up with dozens of stitches and was sent to a live-in treatment facility for six weeks.

When he was released, he went back to school — the arts magnet program, where he still felt embraced by the community. But at home, there was another crisis. His family’s house was in foreclosure, and they would soon have to move. Theo had lived in the home his entire life. The family was stressed, and Theo dreamed of the day he could help out financially.

Theo and his mom visited Starbucks one afternoon for an escape. Theo shook his head when Lori asked if he wanted anything. He wore teal press-on nails on nine fingertips. He sank into a chair, pulled a scrap of paper from his pocket and drew a diagram.

“This is like my depression and self-harm,” he said, pointing at two circles. “They both tie in together. I self-harm because I’m depressed, and I’m depressed because I self-harm. It’s like a vicious cycle.”

Theo leaned over and drew a smiley face on his mom’s shoulder.

“Are you going to promise not to self-harm?” Lori asked.

Theo shrugged. “I’m not going to make any promises not to, because s— happens.”

Lori sighed. She said one blessing was that Theo didn’t end up getting hormone therapy.

“Theo is still figuring himself out, and I don’t believe that testosterone would be the best thing for him emotionally,” she said. “He’s already got a lot of anger directed inward. I don’t think adding fuel to that mix would be good.”

These days, Theo’s father is more accepting, in part because Theo tries not to talk about gender or sexuality around him.

Lori said she believes Theo’s gender dysphoria is a component of the overall depression, not the root cause. Now, Theo said, he attributes about 15 percent of his anxiety and depression to gender issues; it used to be 95 percent.

This summer, Theo changed in a different way. Raised loosely Catholic, Theo met a Muslim classmate and did some research.

“I didn’t want to remain ignorant,” he explained. “I started reading.”

He said he found what he’d been seeking, and converted to Islam just before returning to school this fall.

“There was something about Islam that called to him,” Lori said. “He’s happier, for the most part.”

He still prefers baggy pants but wears a hijab to cover his hair in public and on social media. He prays and fasts. He eventually wants testosterone therapy, but probably not gender reassignment surgery.

“My faith has helped quell some anxiety,” he said. “I know that Allah looks at me with acceptance.”

It’s one of many changes his mother has rolled with over the years.

“What else can I do?” Lori said, shaking her head. “Your child is hurting, and you can’t help. All you can do is love and support, and you know love isn’t going to fix it.”

EDITOR’S NOTE: The Associated Press followed Theo Ramos for more than a year as he grappled with his gender dysphoria. This is the final installment of a three-part story.

PART ONE : As a young child, Theo Ramos found himself at war with his body.

PART TWO : Living with a transitioning transgender child “is anything but a straight line,” as his mom says.

PART THREE: Visibility of transgender issues is at a high, but all the talk in the world doesn’t make life any easier as a gender-fluid or transitioning kid.