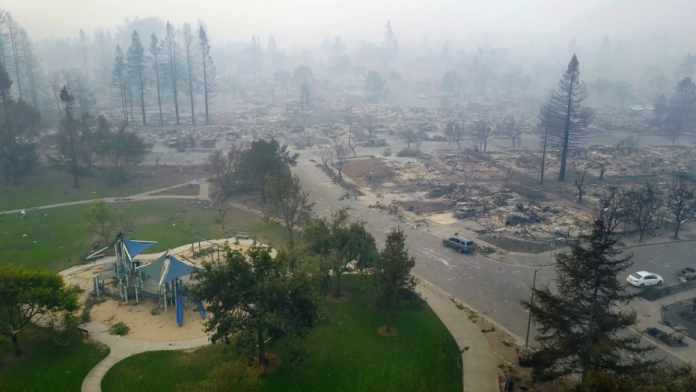 SAN FRANCISCO –  Smoke from the wildfires north of San Francisco has sank air quality level in the Bay Area to the same unhealthy level as some of China’s smog-choked cities, sending people to emergency rooms, forcing schools to close and people to wear masks when they step outside.

The region has endured days of choking smoke since the fires began Sunday night and claimed at least 31 lives and destroyed some 3,500 homes and businesses.

On Thursday morning, air quality in the most of the region was as bad as Beijing, China’s notoriously polluted capital, according to the Bay Area Air Quality Management District.

“We have unprecedented levels of smoke and particles in the air that we normally don’t see,” said Ralph Borrmann, a spokesman for the district. He called it the worst air quality ever recorded in many parts of the Bay Area.

Officials warned that very fine smoke particles, thinner than a human hair, can get lodged in the lungs and into the bloodstream, causing irreparable damage to the body. In Solano County, hospitals there received more than 250 people who complained of toxic air inhalation, the county’s health officer Bela Matyas said Thursday.

With winds expected to continue blowing smoke from the fires to populated areas this weekend, many schools decided to close Friday and organizers canceled weekend events, including an Oktoberfest in Walnut Creek and a fitness festival and half marathon in San Francisco.

Sports teams are monitoring the air quality as they prepare to host games.

The NFL has been exploring options to move Sunday’s game between the Oakland Raiders and Los Angeles Chargers if it becomes necessary.

Oakland, which is some 45 miles (72 kilometers) south of the fires, has been blanketed by smoke.

Officials at the University of California, Berkeley and Stanford are monitoring the air quality situations as weekend football games approach.