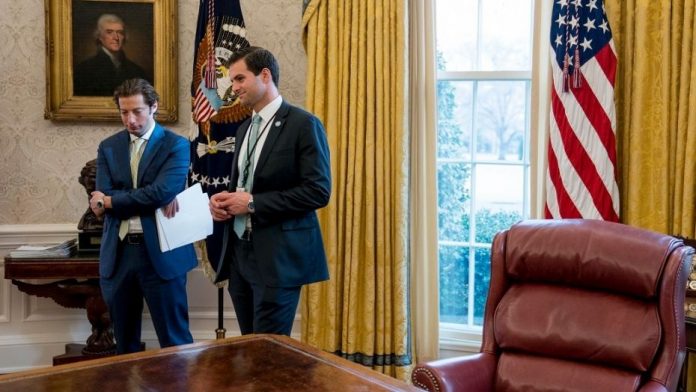 One of President Trump’s longest-serving aides, John McEntee, who served as Trump’s personal assistant, was fired from the administration this week.

The Wall Street Journal first reported that the 27-year-old was let go because of “an unspecified security issue.”

Sources told Fox News that the security clearance was not the issue, while CNN reported that he was under investigation by the Department of Homeland Security for financial crimes.

While McEntee may no longer work at 1600 Pennsylvania Avenue, Trump’s 2020 Republican campaign announced that McEntee will serve as a senior adviser for campaign operations.

During his time in the White House, McEntee made sure Trump had markers to sign autographs and delivered messages, among other responsibilities, The Journal reported.

McEntee’s departure is among the latest in a series of recent White House firings and resignations under the Trump administration.

On March 13, the day after McEntee was allegedly escorted out of the White House, The Wall Street Journal reported, Trump announced in a tweet that Secretary of State Rex Tillerson will be replaced by Mike Pompeo, the current director of the CIA.

In light of McEntee’s departure, here are three things to know about him.

He was a quarterback at the University of Connecticut

During his college years, McEntee was the starting quarterback at the University of Connecticut, more commonly known as UConn.

According to his football biography on the university’s website, he was the team’s starting quarterback in every game in 2011.

McEntee, who walked on to the team, completed 172 passes for more than 2,100 yards in his first season as the Huskies quarterback. His record included 12 touchdowns and eight interceptions, according to USA Today.

He’s known for his trick shots

In 2011, McEntee was seen completing a series of impressive trick shots in a video that would later go viral.

“We posted it on YouTube on Tuesday and then the next day it was on the front page of Yahoo. I was going to have a heart attack. I couldn’t believe it,” McEntee once told CNBC.

He joined Trump’s campaign in its early stages

McEntee joined Trump’s campaign as a volunteer in 2015. Before working with Trump, McEntee was employed by Fox News as a production assistant.

He reportedly sent a series of emails to Trump’s campaign team asking how he could get involved. But his emails went unanswered.

McEntee eventually sent one more offer, presenting himself as someone who could answer the abundance of random emails that would come through to the campaign, Politico reported. His request was answered and he was hired as a volunteer, later becoming a full-time employee.

Fox News’ Adam Shaw and The Associated Press contributed to this report.