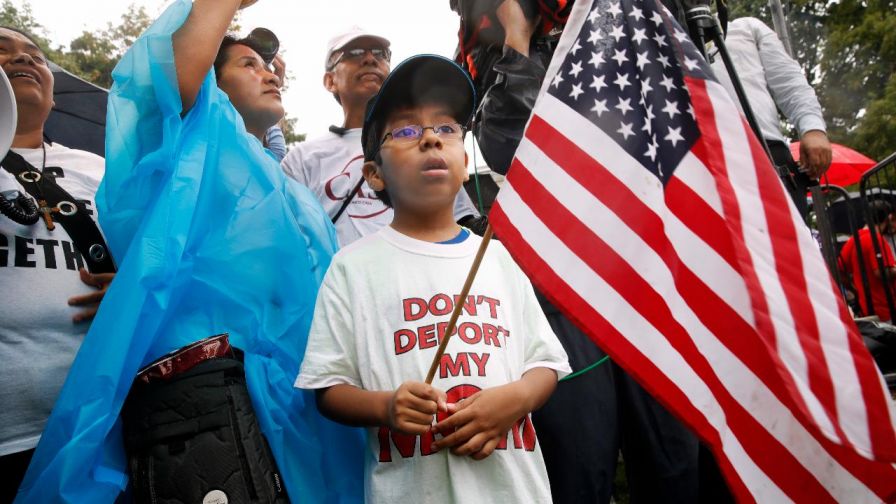 President Trump has a litany of demands in order for his administration to extend a program that protects certain young undocumented immigrats from deportation – known as the Deferred Action for Childhood Arrivals, or DACA.

“This plan will work. If followed it will produce an immigration system with integrity and one in which we can take pride,” Attorney General Jeff Sessions said in a statement. “Perhaps the best result will be that unlawful attempts to enter will continue their dramatic decline.”

But the administration’s proposals have already angered key Democrats who met with Trump last month.

“We told the president at our meeting that we were open to reasonable border security measures … but this list goes so far beyond what is reasonable,” Pelosi added.

The Trump administration officially announced its plan to end the DACA program – which provides a level of amnesty to certain illegal immigrants, many of whom came to the U.S. as children – with a six-month delay for current recipients earlier this year.

With the delay, the solution for protecting young immigrants from deportation is punted to Congress, with only a few months to pass immigration reform legislation.

Read on for a look at how the DACA program works and why the administration disbanded it.

The DACA program was formed through executive order by former President Barack Obama in 2012 and allows certain people, called Dreamers, who come to the U.S. illegally as minors to be protected from immediate deportation. Recipients are able to request “consideration of deferred action” for a period of two years which is subject to renewal.

“Deferred action is a use of prosecutorial discretion to defer removal action against an individual for a certain period of time,” U.S. Citizenship and Immigration Services states. “Deferred action does not provide lawful status.”

TRUMP EXPECTED TO DECIDE SOON ON FATE OF DREAMERS

Individuals must also have a high school diploma, GED certification, been honorably discharged from the military or still be in school. Recipients cannot have a criminal record.

It does not provide “legal status.”

Thousands of people could lose their jobs should Trump decide to phase out the DACA program, according to a recent study by the left-leaning think tank, the Center for American Progress.

“As leaders of communities across the country – individuals and institutions that have seen these young people grow up in our communities – we recognize how they have enriched and strengthened our cities, states, schools, businesses, congregations and families.”

Nearly 2,000 leaders have signed a letter asking Trump to protect the Dreamers, including eight governors.

“As leaders of communities across the country – individuals and institutions that have seen these young people grow up in our communities – we recognize how they have enriched and strengthened our cities, states, schools, businesses, congregations and families,” the letter said.

Why did the Trump administration dismantle it?

During the presidential campaign, Trump referred to DACA as “illegal amnesty.” However, he seemingly signaled that he had softened his stance on the program in April when he told the Associated Press that DACA recipients could “rest easy.”

Yet the administration announced its plan to dismantle the program in September.

MOTHER OF TWO AT CENTER OF DACA DEBATE IN KENTUCKY

Acting Homeland Security Secretary Elaine Duke said that while DACA will be phased out for current recipients, “no new initial requests or associated applications filed after today will be acted on.”

Republicans – and some Democrats – opposed Obama’s order from the start as a perceived overreach of executive power.

King has remained a stalwart Republican against the program; he suggested in August that DACA recipients should turn their parents in to federal immigration authorities.

Attorney General Jeff Sessions blasted the Obama administration’s “disrespect for the legislative process” in enacting the 2012 policy as he revealed the Trump administration’s decision. He also argued that the “unilateral executive amnesty” could have been struck down by courts had it remained in place.

“Such an open-ended circumvention of immigration laws was an unconstitutional exercise of authority by the executive branch,” Sessions said.

Obama spoke out on social media after the Trump administration’s announcement, stating that it’s “self-defeating … and it is cruel” to end the DACA program, and questioned the motive behind the decision.

Ahead of the decision, some Republicans stressed the need for protections offered from DACA and urged lawmakers to quickly pass immigration legislation.

TRUMP WILL ALLOW IMMIGRANTS TO OBTAIN CITIZENSHIP THROUGH MILITARY SERVICE

House Speaker Paul Ryan and a handful of other Republicans had urged Trump to hold off on scrapping DACA to give lawmakers more time to come up with a legislative fix. But after the decision was announced, Ryan, too, blamed the Obama administration for a “clear abuse of executive authority, an attempt to create law out of thin air.”

“It is my hope that the House and Senate, with the president’s leadership, will be able to find consensus on a permanent legislative solution that includes ensuring that those who have done nothing wrong can still contribute as a valued part of this great country,” Ryan said.

Congress has repeatedly tried – and failed – to come together on immigration overhaul legislation, and it remains uncertain whether the House would be able to pass anything on the divisive issue.

After the announcement, Trump said people should not worry about the decision.

“For all of those (DACA) that are concerned about your status during the 6 month period, you have nothing to worry about,” Trump tweeted. “No action!”

One thing to consider – the decision to end DACA could toss a wrench into Trump’s other immigration plans, including securing the border wall, Capitol Hill aides told the Washington Examiner.

Dreamers were eligible to serve in the U.S. military since 2014 when the Pentagon adopted a policy to allow a certain amount of undocumented immigrants to join.

In the fiscal year 2016, 359 DACA recipients had enlisted in the Army – which is the only branch to accept immigrants of this category.

A Department of Defense official said in April that the military would continue to accept noncitizen recruits, but it is unclear if that will continue to be the case now.