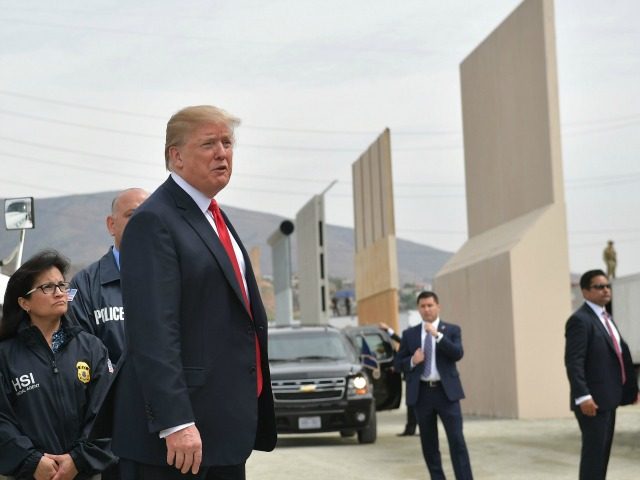 The Washington Post is reporting that President Donald Trump is offering to trade a three-year extension of the DACA amnesty to get multiyear funding for border-wall construction.

The offer would be a climb-down from Trump’s popular immigration reforms and would preserve the legal loopholes which have allowed hundreds of thousands of migrants into the United States to legally walk through the border wall to ask courts for asylum,

White House officials have told key Republican leaders on Capitol Hill that President Trump is open to cutting a deal in an upcoming spending bill to protect young immigrants from deportation in exchange for border wall funding, according to four GOP officials briefed on the talks …

One idea under consideration is a three-year extension of the DACA program in exchange for three years of wall funding, according to a GOP official. This official said talks were fluid.

A White House spokesman declined to comment. Talks are being led by senior policy adviser Stephen Miller and legislative affairs head Marc Short, according to the people familiar with the conversations.

Any deal is a strategic risk for Trump, partly because it would reduce his ability to campaign for his popular set of immigration reforms which would help raise wages for Americans.

Texas GOP Sen. John Cornyn downplayed the offer, according to Politico, which quoted him saying:

I don’t think this is going to be the resolution of the DACA issue. I just don’t see the DACA issue being resolved in the next week.

The reported offer comes after a group of business-first GOP Senators allied with the pro-immigraiton Democratic caucus to vote against Trump’s popular immigration reforms on February 15.  If Trump takes the wall-for-DACA deal, it will help Democrats and business-first Republicans keep Americans’ wages lower as the economy grows.

The DACA extension would provide employers with an extra 690,000 workers, on top of the 1 million legal immigrants who arrive each year to compete against for jobs against the four million young Americans who enter the job market each year.

On March 13, in a speech in California, Trump urged Congress to include funding for his border wall in the 2018 annual appropriations package. He said:

In the upcoming omnibus budget bill, Congress must fund the border wall and prohibit grants to sanctuary jurisdictions that threaten the security of our country and the people of our country.  We must enforce our laws and protect our people.