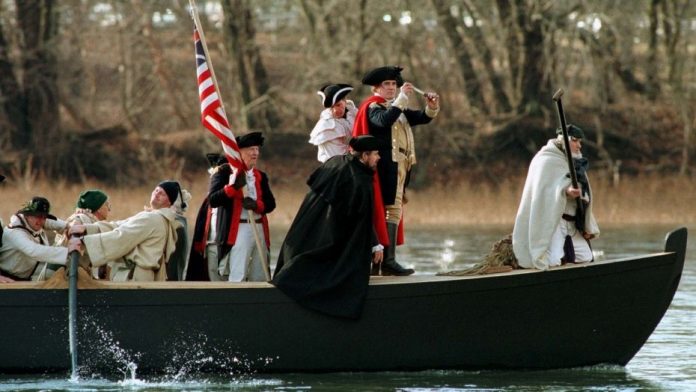 This year’s reenactment of Washington crossing the Delaware will mark the 241st anniversary of the 1776 crossing.

The traditional reenactment of George Washington crossing the Delaware River is still on for Christmas Day, but this Sunday’s scheduled dress rehearsal has been canceled.

The reason: Officials at Washington Crossing Historic Park in Pennsylvania say the river’s water level is simply too low to ensure safe passage for the general and his Continental Army soldiers — and the park’s expensive replica boats.

“It is a disappointment, but we always err on the side of safety for the reenactors and the public — and for maintaining the equipment for future years,” Joseph Capone told the Morning Call of Allentown, Pa.

Capone is executive director of the Friends of the Washington Crossing Historic Park, the nonprofit organization that partners with the Pennsylvania state government to run the park.

But if the region doesn’t get enough snow or rain before Christmas, then the “real” reenactment of the crossing might be canceled too, John Godzieba, chief of the Langhorn Police Department, told the Philadelphia Inquirer.

Godzieba played George Washington for about two decades, the newspaper reported. Though America’s first president almost called off the first Christmas night crossing in 1776 because of bad weather, Godzieba said he’s never had to miss one until now.

“It’s a disappointment, not just for me, but for all the reenactors,” he told the Inquirer.

The reenactment, a tradition for Pennsylvania and New Jersey since the 1950s, cannot take place unless the water level is at least 9 feet above sea level, the Morning Call reported. But the forecast does not show enough rain on the way to increase the river’s level by Sunday.

Capone told the Inquirer that the replica Durham boats used for the crossing are “expensive, handmade works of art,” valued at about $150,000 each. So putting them at risk is a bad idea.

Washington’s decision to cross the icy Delaware on Christmas night in 1776 turned the tide of the Revolutionary War, the Inquirer reported, citing historians. More than 2,400 soldiers crossed the river that night to surprise and capture most of the Hessian forces during the Battle of Trenton, which followed the crossing.

In all, the Continental Army won three battles during their mission, including the Battle of Princeton on Jan. 3, 1777, to give the United States crucial victories needed to ultimately defeat the British and win the war in 1783, the Morning Call reported.

But he added: “There’s always hope.”

Although Sunday’s river crossing has been canceled, other scheduled events — leading up to the point where the reenactors would board the boats — will still go on, the Morning Call reported.