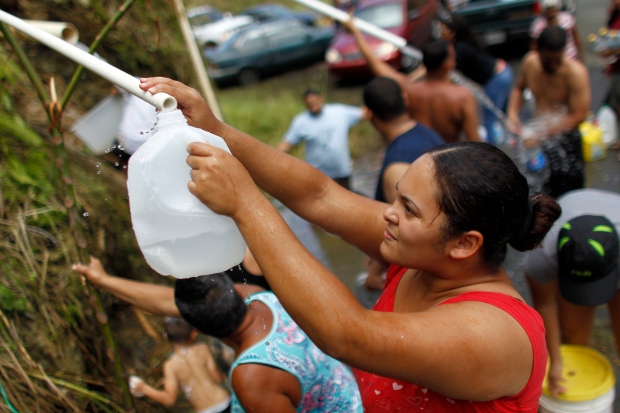 Donald Trump posted a series of tweets this morning slamming Puerto Rico’s mayors, including saying they “want everything to be done for them,” a day after San Juan’s mayor criticized aid delivery to the Hurricane Maria-lashed island.

Trump, who is expected to visit the island Tuesday with his wife Melania Trump, first wrote three tweets Saturday criticizing the “poor leadership” in Puerto Rico, saying local mayors “want everything to be done for them when it should be a community effort.”

He then retweeted videos from the military and other emergency responders working in Puerto Rico.

On Friday, Carmen Yulin Cruz told a news conference she was “done being politically correct” because her people were dying in the aftermath of Maria, the most powerful storm to hit Puerto Rico in nearly 90 years. At least 16 people on the island were killed, and there was widespread damage to homes, roads and infrastructure.

Most of the U.S. territory’s 3.4 million residents remain without power and have struggled to find clean water and fuel 11 days after the hurricane.

“If we don’t get the food and water into people’s hands, we are going to see something close to a genocide,” Cruz said Friday.

The Mayor of San Juan, who was very complimentary only a few days ago, has now been told by the Democrats that you must be nasty to Trump.

…Such poor leadership ability by the Mayor of San Juan, and others in Puerto Rico, who are not able to get their workers to help. They….

…want everything to be done for them when it should be a community effort. 10,000 Federal workers now on Island doing a fantastic job.

The military and first responders, despite no electric, roads, phones etc., have done an amazing job. Puerto Rico was totally destroyed.

Trump also lashed out Saturday at media coverage of disaster response, saying “fake news CNN and NBC are going out of their way to disparage our great First Responders as a way to ‘get Trump,'” and other networks are “are working overtime in Puerto Rico doing their best to take the spirit away from our soldiers and first R’s.”

Fake News CNN and NBC are going out of their way to disparage our great First Responders as a way to “get Trump.” Not fair to FR or effort!

The Fake News Networks are working overtime in Puerto Rico doing their best to take the spirit away from our soldiers and first R’s. Shame!

I will be going to Puerto Rico on Tuesday with Melania. Will hopefully be able to stop at the U.S. Virgin Islands (people working hard).

Around the same time that Trump was on Twitter, Cruz tweeted thanks to the politicians who had seen what San Juan needed first hand. She also said residents need to focus on saving lives and “cannot be distracted by anything else.”

Thanks to members of @Jenniffer2012 @marcorubio for visiting our City to see what we need to accomplish the task at hand: saving lives.

The goal is one: saving lives. This is the time to show our “true colors”. We cannot be distracted by anything else. pic.twitter.com/7PAINk19xM

‘Not a good news story’

Cruz’s comments on Friday were in response to a senior U.S. official calling disaster response in Puerto Rico “a good news story.”

“Damn it, this is not a good news story,” Cruz told CNN. “This is a people-are-dying story. This is a life-or-death story.”

Acting U.S. Homeland Security Secretary Elaine Duke, head of the parent department for the Federal Emergency Management Agency (FEMA), said Thursday she was satisfied with the disaster response so far.

“I know it is really a good news story in terms of our ability to reach people and the limited number of deaths that have taken place in such a devastating hurricane,” Duke said.

The mayor of San German, a town of about 35,000 in the southwestern corner of the island, echoed Cruz’s harsh words.

“The governor is giving a message that everything is resolved, and it is not true,” Mayor Isidro Negron Irizarry said in Spanish on Twitter. “There is no functional operations structure. We are alone.”

The mayor of San Juan begged Friday for more assistance, saying residents are in desperate need of food and water.

Puerto Rico Gov. Ricardo Rossello has called the destruction to the island unprecedented, though he has praised the U.S. government’s relief efforts.

Duke travelled to Puerto Rico on Friday, joining Rossello for an aerial tour of the island. She told reporters she was proud of the recovery work being done, but said she and Trump would not be satisfied until the territory was fully functional. She took no questions from reporters and did not specifically address her “good news” comment or Cruz’s response.