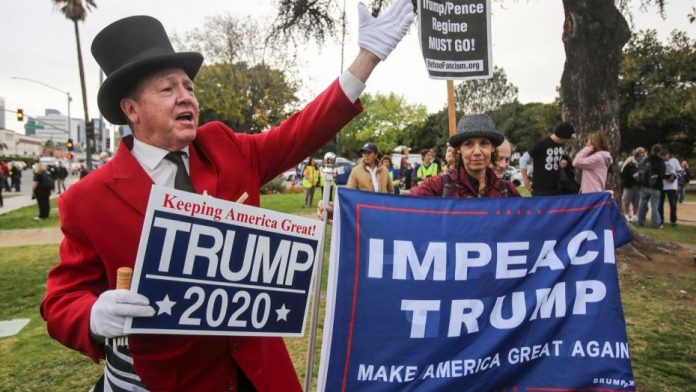 A mix of protesters and supporters greeted President Donald Trump on Tuesday during his first visit to the California-Mexico border since taking office.

There he inspected prototypes for his promised “big, beautiful border wall.”

Hundreds of people, on both sides of the border participated in rallies – cheering, booing and waving Mexican and American flags as rows of police acted as barriers while Trump’s motorcade sped down the road.

U.S. Army veteran and Trump voter Mark Prieto, 48, shook his head as he walked past protesters.

“People are so narrow-minded,” the firefighter told AP. “Finally we have someone who is putting America first.”

“People are so narrow-minded. Finally we have someone who is putting America first.”

Despite the Trump administration’s near-constant battles with California state officials, and the recent Department of Justice lawsuit against the state over its immigration policies, the president’s visit was, for the most part, peaceful.

A heavy law enforcement presence helped. Police officers secured the area where Trump examined eight 30-foot-tall prototypes that were built last year, with authorities using semi-trailers to separate the structures and the Mexican border to provide an extra layer of protection.

A family with two children was detained Monday after they were seen climbing a border fence at the site.

About 10 miles west of the prototypes in San Ysidro, the nation’s busiest border crossing, protesters chanted “No ban! No wall!” while drivers honked to show their support.

“I don’t think it’s really fair how he has the choice to separate us,” Jose Gonzalez, 21, a dual citizen who lives in Tijuana and crosses daily to work in San Diego told the Associated Press.

Trump spoke to immigration officials and with Marines at Marine Corps Air Station Miramar before heading to Beverly Hills for a fundraiser, where he was once again greeted by a combination of activists feuding over the president in a park.

A group of pro-immigration protesters chanted “Say it now, say it clear, immigrants are welcome here.”

San Diego Mayor Kevin Faulconer criticized Trump’s short visit, saying the president won’t get to see all the city has to offer.